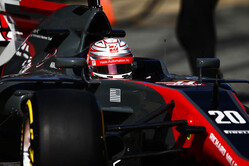 The fourth round of the 2017 FIA Formula One World Championship began with practice Friday at the Sochi Autodrom as teams prepared for the Russian Grand Prix Sunday.

Two 90-minute sessions - FP1 and FP2 - on the 5.848-kilometer (3.634-mile), 18-turn track allowed Haas F1 Team drivers Romain Grosjean and Kevin Magnussen to not only prepare their car's balance for qualifying Saturday and the 53-lap race Sunday, but to also get acclimated to the team's switch to a new brake provider - Carbon Industrie.

While both Grosjean and Magnussen tested the Carbon Industrie brakes for two days following the Bahrain Grand Prix, Sochi marked the first time this year the new brake package was used in competition.

The incredibly smooth surface of the Sochi Autodrom puts grip at a premium, and the inherit challenge of keeping one's racecar glued to the asphalt is multiplied when a new brake supplier is introduced.

Magnussen was the first Haas F1 Team driver out in FP1, followed shortly by Grosjean. Each driver was on the same program - an installation lap on Pirelli P Zero Yellow soft tires and then a baseline stint on the same Yellow softs before switching to Red supersoft tires for two additional runs, each on the same set of supersofts.

Leading the way in FP1 was Scuderia Ferrari driver Kimi Raikkonen, whose fast lap of 1:36.074 was .045 of a second better than the next quickest driver, Mercedes' Valtteri Bottas. Raikkonen's quick lap was .737 of a second off the all-time fastest lap at the Sochi Autodrom - a 1:35.337 set by Nico Rosberg in his Mercedes during qualifying for last year's Russian Grand Prix.

That record ultimately fell in FP2 as the grip level increased and the pace quickened, due in large part to teams switching to the Purple ultrasoft tire, the grippiest compound in Pirelli's lineup.

Scuderia Ferrari remained quickest, with Raikkonen's teammate, Sebastian Vettel, topping FP2 with a 1:34.120, which was .263 of a second faster than Raikkonen and 1.217 seconds faster than the previous track record set by Rosberg.

Romain Grosjean: "We've got very little grip. We're really struggling with the balance. We had some issues, as well, with the brakes over the long runs. We need to look at what we can do better with them. Generally, it's just been a very difficult Friday. The car didn't perform well - very low grip on low fuel and high fuel. Hopefully, we can find some performance and get closer to where Kevin is and get back in the top-10 tomorrow."

Kevin Magnussen: "I'm quite happy. We got through the day without any problems on the car. We got the whole program done, so that's very satisfying. The early feeling is good with the car. We need to look at a few issues on the balance, normal stuff like that, but the baseline is quite good. The balance of the track is evolving in each session, but the balance in the car is similar, so that's a good sign. We'll keep working and try and iron out the small balance issues that we have. As I said, the baseline is good in the car, so it's just details we need to work on."

Guenther Steiner: "It was a busy day today. We're obviously coming to a track which isn't used a lot. It still has low grip levels, but in the morning every lap went quicker as everybody's cleaning the track up and going faster and faster. We had a lot to do and I think we did a lot. We still haven't got all the results yet, as we need to go through data. I would say the issues with the brakes were mainly because they're new to us. We need to find out how they work. Going through the data, we will decide tomorrow what we're doing and how we continue. All in all, we had pretty fruitful sessions. We did a lot of laps and we learned a lot. Now we need to get the best out of what we learned for tomorrow to go into qualifying."