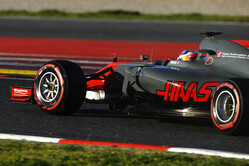 The third round of the 2017 FIA Formula One World Championship began with practice Friday at the Bahrain International Circuit in Sakhir as teams prepared for the Bahrain Grand Prix Sunday.

Grosjean ran 11 laps on the medium tire and Magnussen tallied 10 laps. The switch to softs earned both drivers their fastest times of the session, with Grosjean recording a 1:34.564 on his 14th lap and Magnussen ringing up a 1:35.579 on his 13th lap. The times placed Grosjean ninth and Magnussen 16th overall.

Leading the way in FP1 was Scuderia Ferrari's Sebastian Vettel, whose fast lap of 1:32.697 was .400 of a second better than the next quickest driver, Red Bull's Daniel Ricciardo.

As the sun dropped over the horizon and the track's floodlights illuminated the desert circuit, lap times continued to drop, eclipsing the race lap record of 1:31.447 set by Pedro de la Rosa in 2005 with McLaren and inching ever closer to the qualifying record of 1:29.493 set last year by Mercedes driver Lewis Hamilton.

Both drivers followed the same run program, beginning FP2 on Yellow softs before switching to Red supersofts for a mock qualifying effort. The two drivers then ran stints on used soft and supersoft compounds, with Grosjean tallying 34 laps and Magnussen 33 laps.

Vettel remained the fastest driver Friday, with a quick FP2 time of 1:31.310 keeping him atop the speed charts. The fast lap was .041 of a second better than the next best lap put up by Mercedes' Valtteri Bottas.

Romain Grosjean: "It was a pretty solid day. It was very warm - the first time we've had those conditions this year. We need to keep working on the car. Clearly, tires are having a tough time on the long runs. A qualifying lap is only a lap, so it's pretty fun. There's a lot of work to be done for tomorrow, but as I said, it's the first time we've had the warmer conditions this year. There's a lot to learn from today, and hopefully we can find a little bit of performance for tomorrow."

Kevin Magnussen: "We had a decent day. We have some interesting things to look at for tomorrow, but so far things are not too bad."

Guenther Steiner: "It was a good day for us. For sure, it was our best Friday this year. We completed our programs in FP1 and FP2. The car seems to be competitive, as well, for points. Now we'll go look and see what we can do better and come back tomorrow."