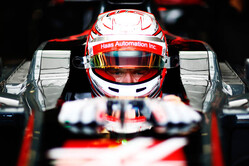 Magnussen set the 14th-fastest time in Q1 with a lap of 1:34.942 to move on to Q2. Grosjean ended up 17th quickest with a lap of 1:35.223, which was thwarted on the final corner of the 5.451-kilometer (3.387-mile), 16-turn circuit when rookie driver Antonio Giovinazzi spun his Sauber. As Grosjean came around turn 16, the yellow flag waved and Grosjean had to lift off the throttle. Only the top-15 drivers advance to Q2.

Taking the pole for the Chinese Grand Prix was Mercedes driver Lewis Hamilton. His fast lap of 1:31.678 set a new track record and was .186 of a second better than runner-up Sebastian Vettel of Ferrari. It was Hamilton's 63rd career Formula One pole and his sixth straight, dating back to last year's United States Grand Prix. Ayrton Senna is the only other Formula One driver to have earned six consecutive poles.

Hamilton's lap is the fastest lap ever turned at the Shanghai International Circuit. The previous best was Michael Schumacher's 1:32.238 set during the 2004 Chinese Grand Prix, which was quicker than the pole qualifying record earned that same year by Schumacher's Scuderia Ferrari teammate, Rubens Barrichello, who ran a 1:34.012. Hamilton's pole-winning lap was also 3.724 seconds faster than last year's pole-winning time, a 1:35.402 set by former Mercedes teammate Nico Rosberg.

Before Magnussen, Grosjean and the rest of their Formula One counterparts participated in knockout qualifying, they had one final practice (FP3) to dial in their racecars for a quick lap around the track.

Quickest in FP3 was Vettel, whose fast lap of 1:33.336 was .053 of a second better than nearest pursuer and teammate Kimi Räikkönen.

Romain Grosjean: "The first lap was looking good in qualifying, then I spun on the last corner for some unexpected reason. We need to look if I went a bit too hard on throttle on the exit. The second lap was actually really good. I was aiming for P10, but Giovinazzi crashed at the last corner and I couldn't complete my lap. It's just hard luck.

"I wasn't so happy with the car this morning in FP3. We struggled a little bit, but we made some gains with changes over lunch. As I said, the car was going to be P10, so we weren't far off chasing Q3. It was looking all good, but then I couldn't do the lap.

"Tomorrow's going to be a long race. We know the tire degradation will be a huge thing here in the rain, and it should rain. It's a white piece of paper to start."

Kevin Magnussen: "I'm fairly happy. We were about half-a-tenth from Q3 and that's the best qualifying I've had for a while. I can't be unhappy with that. It's obviously a little bit annoying not to get through when the margin is so small, but the lap wasn't bad, so it is what it is. I think the car is competitive, especially in race conditions. It's a good car. If it's raining, we have no idea how it's going to be. We'll see how it goes."

Guenther Steiner: "It was very eventful for us. There were good things and bad. It was better than last year, where it was a bit of a low.

"With Romain, you're never unlucky - you make your own luck - and on his first lap he maybe tried too hard. On the second lap, he got into the double yellow and had to slow down, because otherwise he would've moved on without a problem to Q2.

"Everything was possible again to go into Q3. Kevin did a good job. He progressed from Melbourne. He was solid. He qualified 12th. He's making steps, which is very good. He wasn't far off to go into Q3. He was only seven hundredths off. So, there are a lot of positives and maybe we don't see them on the result sheet. It'll be an interesting race."