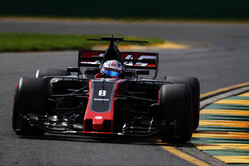 Romain Grosjean was the very first driver to venture onto the Albert Park Circuit, with teammate Kevin Magnussen the third driver to hit the track.

Both drivers logged 20 laps in FP1 with each following the same program – installation lap on Pirelli P Zero Yellow soft tires, eight consecutive laps on the same set of Yellow softs and then a switch to Red supersoft tires for stints of five and six laps, respectively.

Grosjean was eighth quickest in FP1 with his best time being a 1:26.168, secured on his 14th lap. Magnussen was 17th fastest with a time of 1:27.667 on his 12th tour. Each driver earned their best time on Red supersofts.

Leading the way in FP1 was the Mercedes duo of Lewis Hamilton and Valtteri Bottas. Hamilton's quick time of 1:24.220 was .583 of a second better than Bottas. More pointedly, Hamilton's fast lap in FP1 was only .691 of a second off the all-time lap record at Albert Park Circuit – a 1:23.529 set by Sebastian Vettel in qualifying in 2011.

Adversity found Haas F1 Team in FP2. The crew chased a water leak on Magnussen's car, limiting him to just eight laps, with his best being a 1:27.279 secured on his fifth lap while riding on Red supersofts. Grosjean overcame two separate lock-ups – one which put him onto the grass in turn one and another that sent him on a brief drive through the gravel in turn three. Nonetheless, Grosjean was able to tally 29 laps, with his best being a 1:25.436 on his ninth lap while shod on a set of Purple ultrasoft tires.

Hamilton continued his quick pace by finishing atop FP2. He was the only driver to lap the track in under a minute and 24 seconds. His quick time of 1:23.620 was .547 of a second better than his nearest pursuer, Scuderia Ferrari's Vettel, and only .091 of a second off Vettel's 2011 lap record.

Romain Grosjean: "It was a pretty good day on my side of the garage. The car felt much nicer than in winter testing, which is great. It's good to be here and put the right setup on the car and go out there and have some fun. We more or less did the program we expected to do today, which is surprising for a first day in Australia, though there was a bit of trouble on the other side of the garage. Hopefully we can share our data and get even faster for tomorrow. I'm sure there are plenty of areas where we can improve. Hopefully, tomorrow's going to be a good day."

Kevin Magnussen: "It was a frustrating day. I didn't really get much out of it. We'll investigate and, hopefully, find the issue. We'll see what happens tomorrow. We don't know what the weather's going to do. It might rain and everything will change anyway. Let's see what happens. It's good to see, though, that the car is competitive. That's very exciting for the season. That's the positive to take from today."

Guenther Steiner: "I think we had two scenarios. One driver, Romain, had a good session. He learned a lot, did a lot of running and seemed to be competitive. With Kevin, we had a few issues. In the morning we couldn't find the balance on the car, and in the afternoon we were working on it. It seemed to go in the right direction until a water leak. We didn't do very much running. All in all, I think for the first day out in the new season it's not too bad. As we expected, there'll be a very tight battle in the midfield. We still don't know where we're at really until tomorrow's qualifying. We'll work hard to sort out Kevin's car for tomorrow's FP3 session and try to do our best."