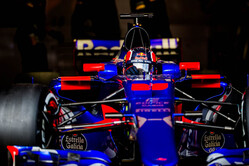 Whether it's the livery, or the Mercedes curves, the Toro Rosso STR12 is certainly one of best nicest looking cars this season.

Unfortunately, after the opening four days of testing, the performance of the car leaves a lot to be desired.

Monday's "niggle" was followed by a slightly better day on Tuesday, however, on Wednesday plans to give both Daniil Kvyat and Carlos Sainz time in the car were scuppered by a drivetrain issue and on Thursday further engine problems meant the Russian only completed one lap.

Despite the issues, team boss Franz Tost is confident that before too long his team will not only be battling a hotly-contested midfield but leading it.

"It looks good, it looks fast, and the drivers are doing a good job," said the Austrian. "If we get everything under control from the technical side, I am convinced we can achieve our goal."

"We don't know how much fuel all the other teams are running, but I am optimistic that Toro Rosso will be in the front part of the midfield," he insisted.

Technical Director, James Key, agrees: "Haas looks quite reasonable, they are looking in reasonable shape," said the Briton. "We have to see how that develops next week and into Melbourne. But they have done a good job,"

Asked why he didn't included McLaren and Sauber in the scenario, the response was blunt: "No disrespect to them but you asked who I thought was good, and I don't think we can tell from either of those two teams at this stage.

"I guess McLaren, like us, have had the dramas this week. Clearly they haven't put a full programme together at this stage so I don't think it is easy to comment, but I am sure everyone is very fast."