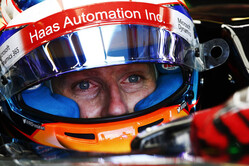 The second round of the 2017 FIA Formula One World Championship began with practice Friday under wet and raw conditions at the Shanghai International Circuit as teams prepared for the Chinese Grand Prix Sunday.

After Haas F1 Team drivers Kevin Magnussen and Romain Grosjean were first out in FP1 for their respective installation laps on the Pirelli Cinturato Blue full wet tire, the red flag waved. Thick clouds and fog prevented the track's medical helicopter from traveling to the FIA's designated hospital if it were needed, resulting in a 43-minute delay.

When the circuit reopened, Magnussen and Grosjean returned with their respective Haas VF-17s outfitted on the Pirelli Cinturato Green intermediate tire. Track conditions remained treacherous, with both drivers enduring minor spins. Magnussen made eight laps and Grosjean six before the red flag was displayed again for the same reason as before, scuttling the remainder of FP1.

Conditions did not improve for FP2. Intermittent drizzle persisted and low cloud cover remained, keeping the medical helicopter grounded. Not a single lap was turned.

Romain Grosjean: "It wasn't a great afternoon for anyone, for us, the fans, the TV viewers, anyone waking up back in Europe. We managed a few laps in the morning, which is better than nothing, and I've got a few ideas of work we need to do and where we need to go. We were planning to try that in FP2 but, obviously, that didn't happen. It's going to be a very busy Saturday morning and we're going to think about what the race is going to be. The car didn't feel too bad, so I'm pretty encouraged by that. We'll see how things develop through the weekend."

Kevin Magnussen: "There was nothing really learned today, so hopefully we can get some driving in tomorrow. The forecast is meant to be better. We'll see. We want to drive, we want to be on track, but it was out of our control, so what can we do?"

Guenther Steiner: "Not a lot can be learned from a day like today. What can you do? We know our cars run, and that's about it. It's unfortunate that not a lot of running took place today for anyone, but you also understand why. We all take safety seriously, and if the medical helicopter can't fly because the conditions won't allow it, then it can't fly. It's pretty straightforward. Tomorrow is supposed to be a much better day weather-wise, making final practice and qualifying that much more important for the race."