Steiner: We are not a 'one-year wonder' 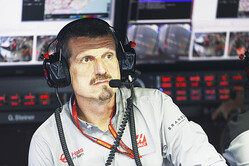 With the demise of Manor earlier this year, the sport saw the end of the last of the three teams that entered in 2010, the Banbury-based outfit, along with Campos and 'Lotus', encouraged by talk of budget caps, cheaper engines and level playing fields.

There was no such incentive for Haas, instead the American outfit, which had effectively cut its teeth in NASCAR, entered F1 with no such promises, instead seeing the sport as a means to prove itself and thereby promote the products of the man driving the dream, Gene Haas.

While the 2016 season opener saw a dream debut for the American team, a year on and neither car made it to the finish.

Now into its second season, team boss Guenther Steiner insists the outfit is no 'one-year wonder' rather a "a serious long-term race team".

"There was no big miracle in the race, but a small miracle in qualifying with finishing P6, behind the three frontrunner teams," he tells the official F1 website, referring to Melbourne. That was also pretty cool!

Having referred to the "three frontrunner teams", he is asked how he sees the current order of things.

"The big teams, especially Mercedes and Ferrari - I think Red Bull is a bit behind - are pretty much ahead of the rest," he admits. "The four midfield teams are pretty close together.

"But, there is a significant gap to the big three," he continues, "take the qualifying times, multiply the gap by the number of race laps and there you are. Will that change? I hope so, but my fear is that it will stay that way for the whole season."

In terms of the midfield, and even the leading group, being so evenly matched, strategy is key.

"For all the teams that are pretty close together, strategy is a differentiator," he says. "You see that with Ferrari and Mercedes, but also in the midfield sector.

"In China it was the conditions and the safety car. In Bahrain, again the safety car, one virtual and one real. So whoever gets it right in these unforeseeable situations is at the front in the end. And there strategy plays a huge part.

"In a normal race with only one pit stop, the race result is, of course, more predictable. But we haven't had such a 'simple' race so far. That is good news."

As is the case with most teams, Barcelona, the race after Sochi, will witness the first major upgrades of the year.

"We will have a substantial upgrade for Barcelona," he confirms, "and the next step is still in the wind tunnel! Once we find the gains we will start producing. There is a good plan in place. And of course bits and pieces we will bring at any other race."

After just one season, the team opted to part company with Esteban Gutierrez, bringing in Kevin Magnussen as partner to Romain Grosjean.

"Very simply, you try to improve," says Steiner. "Esteban didn't score any points last year, and it was also important for us to see if it was the driver or us not delivering. That's why we decided that we need a change.

"There are not too many drivers in the league of Kevin, and we knew Kevin already, as we had spoken with him already the year before. So we talked again and it didn't take long to come to an agreement."

Of course, Magnussen and Grosjean have reputations that precede them.

"Both had some troubles in the past, but difficulties make you better," he insists, "and both are still in F1, so there must be more to it.

"But to be fair, we never really investigated why they had to leave teams, we took them as individuals who would suit our mentality at a time when they were free and we wanted them.

"I think they fit pretty well into our team, maybe we are a bit troubled as well! There is the American saying: 'What makes you suffer makes you tougher!'"