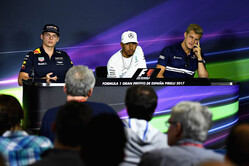 Marcus, Sauber's announced an engine partnership with Honda, are you pleased with the Honda deal and does it push you towards a long-term commitment with the team?

Marcus Ericsson: I think looking at it right now, it's obviously not maybe the best decision because Honda is struggling quite a lot at the moment but I think in the longer term for the team, I think it can be a very clever decision because I'm sure Honda sooner or later will get it together - but yeah, let's wait and see. At the moment, it's maybe not the best one.

And what impact does it have on this season in terms of preparation for next year. Does it impact the way you approach things? Does it impact you as drivers?
ME: No, not really, I wouldn't say. We have the engine we have at the moment and we need to maximise our season and focus on that. And then, as every team, at some point you need to start looking at the next season and focus the development for next year but at the moment all our focus is on this season and trying to catch up that midfield group.

Lewis, you've been very consistent for so long, it seemed odd that Sochi went the way it did - have you figured out what happened?
Lewis Hamilton: Yeah, it was just a bunch of small things all added up in one pot. Nothing in particular, no single one thing that was bigger than another, that just led us in slightly the wrong direction. Should be better this weekend.

The team was talking about the difficulty of getting these tyres into a particular window. Is that a contributing factor? Is it less likely to be a factor this weekend, for example?
LH: It's a tyre issue in the sense that the tyre's working range is quite small, so yeah, the whole weekend I generally wasn't in the right window with it.

Obviously if you couldn't win, it was a good job that your team-mate Valtteri Bottas managed to finish ahead of Vettel. How pleased were you personally for Valtteri and what do you expect from him now that he's got that first win under his belt?
LH: Well, I've said from the beginning of the season that he was in competition, so it's no surprise that he would eventually get a win. But I was actually very happy. You saw at the end of the race I could at least be happy and share in the glory of the team beating the Ferraris still and keeping us in the lead of the Constructors' Championship. I was proud of what we had achieved - I just wish that I could have backed him up, in the sense of getting a 1-2, but we can work on that maybe this weekend.

Max, it's 12 months since you sat in this room, having just made the switch to the Red Bull team and what a weekend that turned out to be for you. Your learning curve has been more or less vertical since then, but I wonder in what areas do you feel that you've made real improvement, from 12 months ago to now?
Max Verstappen: Difficult to say...

MV: I already had that back then.

LH: I was saying he's got his driving licence now. It's a big step.

MV: Yeah, I think it's just general experience, both in life and in racing but nothing major, I would say, in terms of driving the car faster or anything. It all adds up to little things and if you feel better in the car, you understand the car better.

What about the way you deal with these guys and particularly the ones at the front?
MV: Well yeah, you're driving more amongst them compared to what I was doing before but that was always the aim and the target once I moved into Formula One. Natural process, I guess.

So we know you have a heavily updated car here. Can you put in context for us just how different it is and what were the key areas for you that needed to be addressed in how it handles?
MV: I think, first of all, everybody is bringing quite a few updates. Hopefully our updates will bring us a little bit more to the front but I think in every area we can always improve so I think that's what we are aiming to do with the car. Yeah, you see a few differences on the car and hopefully we can close the gap a little bit here already and then go on from there.

And in terms of what you wanted to fix and how it handles?
MV: Every area, it needs to be faster everywhere.

(Sef Harding - Xiro Xone News) Lewis, you've often been referred to as the Jedi Knight of F1 and it is Star Wars - I refer to you as the Jedi Knight of F1 - and this is the month that we celebrate Star Wars so the question to you is what colour Lifesaver would you chose? This is a very important question because it's going to go on social media because it determines what side of the force you are on?
LH: Well, firstly it's kind of exciting to have a lot of different questions, much nicer different questions! I want to be purple but I'm a huge fan of Star Wars, obviously good friends with George [Lucas] and a huge admirer or what he created, Star Wars. I think it's frigging amazing, excited for the... seen every one. I'm excited to see what comes next.

(Oana Popoiu - F1Zone.net) To all of you: Kimi Raikkonen drove half of the Russian Grand Prix knowing he had Valtteri Bottas behind and not Lewis Hamilton. How important is it for you to know what driver is behind you? Do you drive differently, knowing it's one or another?
ME: No. Usually you know who is behind you if you're in a close fight with them. If there's someone who is not that close then it doesn't really matter but I would say there are some drivers who are maybe more aggressive than others but then in the end we all respect each other and race in a good way.

LH: I always know who's behind me but it doesn't really make any difference.

MV: Yeah, I think it shouldn't make a difference and if you don't know, look at your pit board. It's standing on the pit board.

(Phil Duncan - PA) Lewis, this is obviously the first year you've come back to Spain since your crash last year with Nico. I was just wondering firstly what you drew from that experience as a driver and as a person and secondly of the subsequent reports that you threatened to... or you offered to quit Mercedes after the crash? So did you offer to quit Mercedes after the crash with Nico last year in Spain?
LH: I did not.

(Phil Duncan - PA) And secondly what did you learn as a person and as a driver from that experience?
LH: Not much really, it was a racing incident. I've had lots of crashes during my career and that was just another one. We got through it pretty smoothly or as smooth as it could be, I would say, and yeah, went on and won many more races after that.

(Livio Oricchio - GloboEsporte.com) To all drivers, starting with you Lewis, you said that the main problem you had in the last race was to take the tyre in the window temperature and here you have the hardest tyres that Pirelli supplies in Formula One. Do you think it can be an issue here?
LH: The tyres are definitely... there seems to be quite a small working window and it's a new tyre for us also. I think we are all learning as we go from race to race and I think for some cars perhaps it works immediately than for others. There's different preparations. If you look at Bahrain, for example, the Red Bulls drove as slow as they could on the laps to prepare for qualifying but still had the tyres ready whereas the Ferraris were flat out through the warm-up laps so there's a different approach for everyone. It's a new tyre which is exciting. They are very very hard tyres so a hard, safe tyre basically. It's going to be interesting this weekend to see how they work.

MV: I think in general in Sochi it's not a lot of grip and then combined with a tricky warm-up, it just makes it a bit more difficult. It was quite difficult to get the tyres in the window and you could see a lot of build laps or second timed laps which were faster so I think that will be a little bit different here where the tarmac is a bit more rough so harder on the tyres. But yeah, we have quite hard compounds so we'll see. I think in general you always try to go for the softer compounds, also here but yeah, I think the warm-up is still critical.

ME: I agree with the guys but the only thing really apart from that I could say is that I think this weekend we could probably live with another step softer. I think the hard tyre is not really useable. I think a supersoft for qualifying would be quite nice.