Horner: Daniel and Max will be at Red Bull in 2018 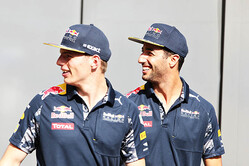 At the best of times, Daniel Ricciardo and Max Verstappen would be considered two of the most promising talents on the grid, never more so than at a time so many other drivers contracts are about to expire.

So it follows, that at a time the Austrian team is looking over its shoulder to an ever-improving Force India, having already lost sight of Ferrari and Mercedes, the Australian and his Dutch teammate might feature on quite a few 'want lists'.

However, team boss Christian Horner insists that neither driver has the performance-related opt-out clauses in his contract that are the bane of many a rival outfit.

Asked if the pair had such clauses, Horner told Reuters: "No, none at all. They are both straightforward clean contracts. I've got no doubt that both Max and Daniel will be driving an RB14 next year."

With Sebastian Vettel yet to extend his contract at Ferrari and a question mark over Kimi Raikkonen, not to mention the fact that Valtteri Bottas is on a one-year deal, it's fair to say that there are already a number of options that could turn a fast, race-winning driver's head.

However, despite the current 'slump' - certainly by its own lofty standards - Horner remains optimistic.

"Chassis-wise we are having to make up ground to our competitors," he admitted. "Ferrari have got a very strong package at the moment. Mercedes obviously are right there also and I think we're closing the gap to them, but we're not quite at their level yet."

Of course, the situation with Renault has not helped, and while Horner's claim that he regularly goes to church to pray for the much anticipated upgrade were clearly tongue in cheek, comments made my members of the Red Bull 'family' to the media have not gone down well with the French manufacturer.

"Cyril obviously can be a bit irritable at times," he said. "Sometimes we get mixed messages but the most important thing is that they're working hard, they're making progress and hopefully with the introduction of each power unit we should see incremental improvements.

"Who'd have predicted we'd have won Malaysia last year or Barcelona?" he added. "And we had some other great races at Silverstone, in Austria and Hockenheim.

"We don't take anything for granted and we know we have ground to make up. But the whole team is massively motivated to close that gap down and I think has actually been doing a very good job over the early races."