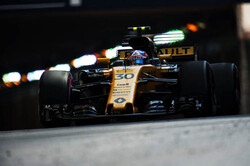 Renault Sport Formula One Team experienced a challenging first day of the Formula 1 Grand Prix de Monaco with both Nico Hulkenberg and Jolyon Palmer missing out on track time during the course of the day. Nico set a 1min 14.870secs in the afternoon despite sitting out almost all of FP1 whilst an electronics issue was investigated. Jolyon Palmer enjoyed a trouble-free FP1, but a power unit related issue in FP2 meant he could only complete eight laps.

Nico Hulkenberg: "We made progress in the afternoon after a morning where I wasn't put through my paces but my team mechanics had all the work to do. There were no issues for me in the afternoon however we were a bit behind where we should have been by missing the earlier track time. I focussed on assessing parts and set-up more than going all out for the fastest time possible, so there's more in the bag for Saturday."

Jolyon Palmer: "Monaco's all about building momentum and getting the laps in, so in that regard it was a positive morning but a less positive afternoon. There's certainly more pace to come from me and the car so I'm very eager to get back out on track, although we have to wait a day longer for FP3 and qualifying here. Obviously the afternoon was unfortunate but there's still a lot of potential for the weekend ahead."

Nick Chester, Technical Director: "Today certainly wasn't the start we wanted for our Monaco weekend. Nico suffered from an electronics issue in the morning whilst Jolyon experienced a power unit related issue in the afternoon, meaning less running for both drivers. We have some work to do but we know where improvements can be made looking to qualifying on Saturday."