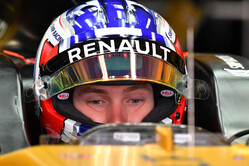 Following his disappointing outing in Sochi, Sergey Sirotkin will get another run in the Renault RS17 when he participates in FP1 at Barcelona on Friday.

Driving Nico Hulkenberg's car, the Russian completed just 2 laps before suffering a hydraulics issue which necessitated a change of gearbox and no further running.

"That’s motor sport," he said, "but it’s better to have an issue with the car in practice than in qualifying or the race."

Indeed, while Jolyon Palmer went on to suffer a litany of issues, Hulkenberg brought his car home in 8th for the team's second successive points finish of the year.

"Sergey's issue in Sochi was related to a gearbox shift valve and it was a big shame for him to get so little running," admitted Chassis Technical Director, Nick Chester. "He's in Jo's car for FP1, and we expect he'll do a good job."

As is the case with its rivals, Renault will be running a number of updates this weekend including new barge boards and an updated rear wing.