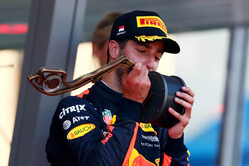 Daniel Ricciardo: "I'm much happier today. I can't obviously complain how it worked out and I have to thank the team. It was cool to show some pace today and we had that clear track. I didn't think the tyres had that much more but I just got into that rhythm, was able to punch out some good times. I knew the pace was right, my engineer was encouraging me on the radio saying: "Pace is really good. Keep going, keep going!" That was certainly motivating and my thanks to the homies. After the safety car it was pretty unexpected when I touched the wall as I didn't brake late or anything, I felt I was quite cautious, but then when I turned I thought the car isn't turning, I then hit the wall and thought I damaged the front wing or something but in the end it was okay. I'm just happy to be back on the podium to be honest. That was definitely the icing on the cake and is a reward for myself and the team."

Max Verstappen: "It is very disappointing after such a clean weekend where everything has gone really well to then feel I lost out on a podium, but I guess that is racing. I tried everything I could to get close to Bottas, you can say we stopped too early or should have gone longer but that is always easy to think after the race. Even after the safety car, I was on fresh, softer rubber but with the wide cars and dirty air you can't make a move and I had no real chance of overtaking here. I think I did 77 laps in traffic today, that isn't much fun and I couldn't push but at least we finished the race which is the biggest positive from the day."

Christian Horner, Team Principal: "A very strong drive by Daniel Ricciardo in the grand prix, after feeling slightly frustrated yesterday things went his way today, getting on to the podium in third place. But what really made the race for him were his laps in free air around the pit stop. We'd elected to try for the undercut on (Valtteri) Bottas with Max and we were within a whisper of achieving that, which Valtterri covered. And that in turn gave Daniel free air which he used to great effect, and that was where he obtained the podium finish. Even after surviving a brush with the wall at the re-start after the safety car, he achieved everything possible today. To get both cars to the finish and a podium on merit is a very satisfactory result here in Monaco. The cars took another step forward here in Monaco and we thank the team at ExxonMobil for bringing an engine oil upgrade here for us, another incremental gain in performance, and we now look forward to Montreal. Our congratulations are with Ferrari on winning this grand prix again after 16 years."