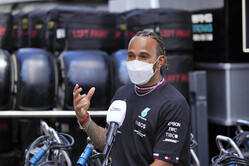 Vowing to give it "everything we've got", Lewis Hamilton throws down the gauntlet as world championship battle heads towards the home straight.

While the Briton has just one DNF (Monza), along with the Italian Grand Prix the Dutchman also failed to complete the British round of the world championship.

In other words, it is finely balanced, and as Hamilton eyes the title that would make F1 history, he is aware of the fight that lies ahead.

"It's important to win every race somehow, you know, maximising our points, that's our goal over these next six races," he replied today, when asked if he expected Mexico to favour his opponent, Red Bull having an enviable record at the circuit.

"It's going to be incredibly difficult," he added, "and there will be moments where we can perhaps edge them out and... I don't like to assume that Mexico is not going to be strong but they are usually very strong in Mexico.

"I think it's going to be... a lot can happen in these six races," he admitted, "so I think we just take it one race at a time, give it everything we've got."