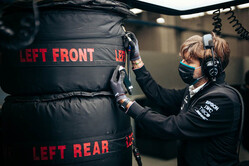 As Max Verstappen reclaims the title lead, Lewis Hamilton explains why he was at odds with his team over tyre strategy.

Speaking in the moments before today's Turkish Grand Prix, Valtteri Bottas joked that every Grand Prix these days appears to be wet.

While this was an obvious exaggeration, it wouldn't be too far off the mark to claim that every race these days features at least one driver arguing with his team over tyre strategy.

Two weeks after Lewis Hamilton and Lando Norris insisted that, contrary to team advice, they could make it to the end on slicks, the Mercedes driver was involved in a heated debate with his engineer during today's race.

Having started eleventh on the grid, Hamilton had made his way up to third and while all around him were pitting for fresh inters, the Briton once again thought he might be able to make it to the end.

In the final stages, Hamilton, along with Charles Leclerc and Esteban Ocon were the only drivers that hadn't pitted, though as his tyres finally began to give the Monegasque finally stopped.

With 8 laps remaining Hamilton also pitted, however, like all those who had previously pitted he soon found that his tyres were graining. However, while all those who had pitted earlier had got through this graining phase, Hamilton and Leclerc were experiencing it at the most crucial stage of the race.

In the final laps, like Leclerc ahead, Hamilton was struggling, while to make matters worse he had Pierre Gasly and Lando Norris closing in.

Running fifth, and fearing that he might fall even further back, the world champion was involved in a number of frustrated exchanges with his engineer, Pete Bonnington.

The Briton insists that his team should either have pitted him earlier in the race, in synch with his rivals, or helped him perserve his tyres until the end.

"The tyres are bald, so you don't know how far they're going to go," he subsequently told Sky Sports. "So there is definitely the worry of the life of the tyre.

"But also I wasn't really that fast at the end there," he added. "I was struggling at low grip. I'm not really sure why.

"Then all of a sudden, I have not such bad pace," he continued. " But I was losing performance to the guys behind. I think probably in hindsight, I should have either stayed out or come in much earlier. Because when you come in with eight laps to go, you don't have time to go through the graining phase of tyre on a drying track. So then I went through this whole sliding phase where I nearly lost four positions. A bit frustrating, but it is what it is.

"It felt good to be in third and it was like, 'if I can just hold on to this, this is a great result from 11th'. Fifth is worse but it could be worse."

"The intermediate obviously looked really scary," admitted Toto Wolff, "but we thought that we could maybe hang out there and finish third with not stopping, and, if a dry line appeared, maybe even going onto a soft tyre until the end.

"So we balanced between pitting, taking it very conservative in fighting with Leclerc and Perez on the track for P3, or taking a little bit of a gamble but either winning or finishing third.

"But when we saw Leclerc dropping off and then Lewis started dropping off, and it was clear we wouldn't make it to the end."

However, adopting the 'we win together, we lose together' mantra, the Austrian insisted that there would be no recriminations.

"We've never had any problems, and there is plenty of time to debate it here and on the flight," he said. "But it's clear in the car you just have a limited amount of information and overall I think that was worth the try today.