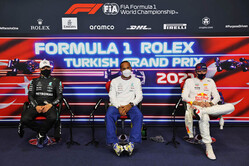 Max, P3, I know you are going to be lining up on the front row. It looks like it's been a difficult weekend, but how do you assess the session and are you satisfied?
Max Verstappen: Yeah, of course, qualifying from the beginning was quite tricky but compared to yesterday we actually managed to turn it around quite well. The laps I think overall were quite good even though maybe the last lap I lost a bit down the straight and we have to look into that. There was of course not the lap time in it to fight for pole but overall I think quite a decent recovery compared to yesterday. Third of course is the maximum today and tomorrow lining up in second. Let's wait and see what the weather will do over night but yeah overall I'm pretty happy.

With that in mind the set-up changes you made overnight will that help you in the race and enable you to push Valtteri in the race?
MV: It should be a bit better. Let's see how competitive how we are going to be in the race, also tyre wear seems quite high on this track. At least now the track is a lot of fun to drive, especially the long left-hander, Turn 8, but we'll find out tomorrow.

And the objective is to think about the championship I guess?
MV: Yeah, try to of course pick up as many points as we can tomorrow.

Valtteri, you're going to line up on pole position tomorrow and narrowly missed out on the quickest time today but you must be pretty happy with how the weekend has gone so far?
Valtteri Bottas: Yeah, it was a good quali. Not easy conditions, especially Q1 was a bit on the edge with the damp parts and still in Q3 the first corner was a bit damp but also Turns 3 and 4. I got some good laps. The last lap I missed a bit in the last sector, I started to gain some understeer. But other than that the lap was really nice and I enjoyed it. Obviously as a team result it was as we planned. So, Lewis with his penalty now gets the minimum penalty he can and I'm on pole so it should be good.

What's the plan tomorrow? Is it push forward and try and win the race or is it to try and help your team-mate Lewis out in the championship?
VB: I'll focus on my own race tomorrow. That's the way to go when you start in front. I hope to keep up a good pace.

Lewis, a great crowd here obviously. I guess you can be pretty satisfied to be pole position? It's the best you could hope for with the penalty you've got with the engine.
Lewis Hamilton: Yeah, first of all, hi to everyone here, we have got such a good crowd here this weekend, which is awesome to see. It's so good to be back in Turkey as obviously last year was an unbelievable year for me and the team, so to be coming back, the track is completely different. The track is absolutely awesome with the grip level it is giving us now. It was really tricky the session in general, because there were still some damp patches and getting the temperature in the tyres wasn't easy. But a really great job by the team and really happy with the performance in terms of getting out at the right time. But I'll give it everything.

How did you feel in FP2 with the long runs doing the long runs? Do you feel that overtaking is going to be easy or is it a challenge?
LH: It's not the easiest, overtaking, at the moment. And we are all on the same tyre as well, so I imagine it's going to be difficult to move up. You saw it at the last race, what happened with Max for example, once he got behind sixth place or something. And vice versa for me also. I don't know, but we have the long straight down the back and we will see what we can do and hopefully we can give the fans here a good race.

Lewis, a brilliantly executed session by you and some searing pace. How good was it?
LH: Thank you. No, it was a really great session. In general the team have performed incredibly well this weekend. Just very, very precise with timings, and the guys in garage, as always, continuing to be precise and everyone back at the factory continuing to push and making sure that we are maximizing everything from the car. But the car has felt good since we arrived this weekend. We have made small adjustments to the set-up but as the track was driving up it was getting better and better. I think these guys were getting closer towards the end but really happy with the end result.

So the car is good, you've just driven a brilliant session, set the fastest time. How does it feel to do all that yet have pole position taken away from you?
LH: Well, I still... I get recorded the pole, right? No? Ah, dammit.

LH: So he gets the pole.

VB: So you need to give the tyre to me.

LH: You can have the tyre. I don't know where they go.

MV: Lewis has a few spare.

VB: I don't think it's fair though.

VB: Even though it was my best pole.

MV: Lewis is going to start his own tyre factory.

LH: We knew it was going to be difficult, being that we had this penalty, which I took yesterday, and tomorrow is not going to be easy to fight my way through but where there is a will there is a way.

You won from sixth on the grid last year, as you say it's 11th tomorrow, just how good was the car in race trim during practice?
LH: We had quite good balance, I think. The track is very aggressive on the tyres, so it'll be interesting to see how it works for everyone, tyre-wise - but getting past people is not going to be easy. I mean, you saw in the last race how difficult it was in the DRS train and no-doubt that will be something similar tomorrow - but it's a long race. I hope there's some rain that comes along. It was actually surprising how fast the track is on Wet tyres - probably faster than any other track we've been to in the wet. It'll be interesting to see how that plays out tomorrow.

Valtteri, it is going to be pole no.18 in your Formula 1 career. Your first since Portugal earlier in the season. How good was the session for you?
VB: It was a good session and obviously as a result for us as a team, it's the ideal, and perfect in a way, with the situation we have and with Lewis' penalty - but the session itself, Q1 was tricky with the damp conditions and, to be honest, at the end of Q2 there was small damp places where I needed to be a bit cautious or try to find the best way around them. But I enjoyed it, still the grip level was decent and, as Lewis said, from the start of the weekend the car has been in a pretty good window in terms of the set-up, so didn't need to make massive changes, so yeah, enjoyed it.

If it is wet tomorrow, how much grip is this track giving, compared to last year?
VB: At least based on the feeling in FP3, it's actually pretty grippy in the wet, and the car felt OK. So no big concerns whatever it is going to be. We have a strong car but obviously Red Bull, they always have good race pace and also Ferrari has been pretty good here.

And how motivated are you to get that win tomorrow?
VB: Very motivated. I haven't won this season yet, so it's a big, big motivation for me but need to focus on certain things in the race, step-by-step and keep the focus and hope for the best.

Max, it'll be another front row start for you tomorrow. First of all, talk us through the performance of the car. Was it better today than it was during practice yesterday?
MV: Yeah, I think we made some decent improvements compared to yesterday where it seemed like we were struggling a bit more to understand how to be quick around here. Just trying to work on that and I think in qualifying again it was a little bit better but still not perfect - but I was still quite happy with the result at the end and the lap itself, so yeah, can't really be too disappointed about that. Yeah, of course, tomorrow, starting second, I don't' think that's a great place to start on the inside because there's no grip on the inside line, so we'll see how that goes.

Assuming you get away OK at the start, do you think you've got the pace to beat the Mercedes tomorrow?
MV: No - but we will of course just try to follow and see what we can do and see what happens in the race in general.