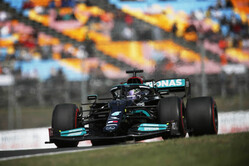 Following this morning's wet session, it was widely anticipated that this afternoon's session, like the race, would be held in dry conditions.

While it has not rained since and the track is clearly drying, there is a 60% chance of further rain over the next hour. While this is a nightmare for the engineers and drivers it is great news for us.

Having lagged behind Lewis Hamilton, Max Verstappen was quicker earlier, but this was in the wet, and while the Dutchman may well perform a few rain dances over the course of the weekend, in general the Mercedes driver appears to have the upper hand.

Going on Friday's evidence, despite his grid penalty, things are looking good for Hamilton, while Verstappen clearly had work to do on their understeer issues.

Alpine looked good, as did Ferrari and McLaren, though Carlos Sainz starts from the back of the grid following his engine change.

With a question mark over the weather, the fact is that it is almost impossible to make any predictions as to what might happen over the next hour, suffice to say that attention will be focussed on the sky and weather radar.

Ahead of Q1, the air temperature is 18.5 degrees C, while the track temperature is 21.8 degrees. According to Race Control there is a 100% chance of rain over the course of the next hour. Despite the fact the track appears mostly dry, the track is declared wet.

Understandably, when the lights go green there is a mad scramble to get out on track and pocket that all-important banker lap. Raikkonen heads the queue, everyone sporting softs.

"Rain is coming," Gasly is advised.

Norris is told the rain will first arrive between Turns 11 and 14.

The lights go green and Raikkonen leads the field out on track.

Hamilton and Verstappen are among the last out, worryingly late in view of the threat from the skies. Indeed, Hamilton is told he will probably have just one dry lap.

Needless to say, drivers are slowing in a bid to create space leading to the usual fears of a mishap.

An early mistake - on his out lap - for Hamilton, while Sainz spins at Turn 1. "Rear tyres," says the Spaniard.

A number of drivers have moments, including Verstappen.

To ad to their woes a number of drivers have their times deleted for exceeding the track limits.

Alonso goes third, ahead of Latifi and Russell, but is demoted by Ocon and then Perez.

Tsunoda goes second while Verstappen can only manage 16th (44.530).

It really is as frantic as it reads.

A 26.520 sees Hamilton go top, while neither Ferrari driver has posted a time.

Norris goes second, ahead of Verstappen, Alonso and Hamilton.

Raikkonen continues to have his times deleted for exceeding the track limits.

Bottas improves to 25.733 as Norris reports that it is "spitting" around the whole track.

Alonso goes second, ahead of Leclerc and Bottas as Hamilton slips to ninth.

"I think we should get another banker," suggests Hamilton.

As he heads out again, Verstappen is told that conditions are improving.

No sooner has Verstappen split the Mercedes pair with a 25.033, than Hamilton raises the bar with a 24.585.

Tsunoda improves to sixth, Perez to fourth and Vettel 12th.

Schumacher goes eleventh, Russell ninth and Sainz... ninth, which is bad news for Ricciardo who fails to make the cut.

The Mercedes pair are among the first out for Q2, both sporting mediums, as are the majority of other drivers.

Elsewhere, Perez suffers an aggressive snap and spins in Turn 1 which will have done his tyres no good whatsoever.

Alonso goes second, ahead of Gasly, Tsunoda and Ocon.

The Dutchman crosses the line at 24.002 but is immediately demoted by his title rival who posts a 23.595.

Norris goes fifth, ahead of Perez, Leclerc and Tsunoda.

With just over three minutes remaining, Leclerc, Russell and Vettel are all in the drop zone.

Quickest in the opening sector, Alonso goes third with a 23.914.

Stroll is off at Turn 1, but nonetheless looks safe as far as Q3 is concerned.

Russell looks set to make the cut but a mistake in the final corner puts paid to his ambitions.

Verstappen goes second only to be leapfrogged by Bottas (23.579).

Courtesy of a tow from his teammate, Leclerc goes seventh with a 24.015.