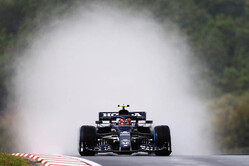 Lewis Hamilton set the pace in both of yesterday's sessions, and though facing a 10-place grid drop after taking on a new ICE, the balance issues encountered by his title rival, Max Verstappen, suggest that the Briton should still be able to challenge for a strong podium place.

Also looking good was Charles Leclerc, though the Monegasque insists that not too much should be read into this as it was only Friday.

Also looking good, other than Bottas and Perez - who was ahead of his Red Bull teammate - were Norris and the Alpine pair.

The big thing however is the surprising level of grip, especially when compared to last year's 'ice rink', which has resulted in a dramatic improvement in lap times.

That said, this morning it is raining, therefore we are likely to see further struggles. Indeed it is somewhat chilly. Indeed, the air temperature is 16.7 degrees C, while the track temperature is 20.5 degrees.

While Inters - of which drivers have been given an extra set - or full wets will be the order of the day (morning), with qualifying likely to be dry, it is likely that we will see much running this morning as the drivers won't want to take unnecessary risks.

The lights go green but few drivers are even sitting in their cars.

Eight minutes in and Gasly ventures out, the AlphaTauri driver on full wets. He is subsequently joined by his teammate.

"The rears are gone," reports Gasly after just 2 laps.

As Sainz goes second (38.551), teammate Leclerc has a little wobble.

Sainz subsequently improves to 37.608 at which point a number of drivers pit, no doubt to switch to Inters.

Indeed, Norris is the first to make the switch, the McLaren driver improving to 36.620 to go second. However, Sainz, on full wets, has raised the bar with a 36.299.

As Hamilton and Bottas head out on Inters, Gasly spins at Turn 11, the Frenchman also on the green-banded rubber.

Russell is off and in the gravel at Turn 2. "I'm beached," he reports, at which point the session is red-flagged. Moments before, Mazepin had spun.

Other than grip, drivers are also concerned at the light reflected off the wet track which is hampering their vision.

Under the red flag, Sainz is quickest, ahead of Ricciardo Norris, Leclerc, Raikkonen and Tsunoda.

The Red Bull pair are the only drivers yet to appear.

The session resumes. In no time at all there are ten, eleven drivers on track, all on Inters.

Vettel goes quickest only to be demoted by Hamilton (33.636) as grip conditions are clearly improving.

Gasly complains of vibrations at the rear.

"I did a 360," reports Verstappen as he spins at Turn 9. Moments later, Vettel spins at the same corner, where there appears to be a lot of standing water.

"Do you think you damaged anything," the German is asked. "No," he responds.

Offered advice by his engineer, Raikkonen stops short of saying "I know what I'm doing", only responding: "Leave me alone while I'm driving."

The times in the wet are quicker than in the dry last year, such is the improvement in grip.

Gasly improve to second with a 31.121 as Leclerc spins at the dreaded Turn 9.

"What, man, come on," shouts Tsunoda as he encounters a slow Perez.

"It's drying out quite a bit," reports Norris. "Asked how far it is from being fit for slicks, he replies: "Miles".

As the clock ticks down, and with no rain anticipated this afternoon or tomorrow, there are only four drivers on track, among them Leclerc.

"That's us all done," reports Mercedes.

"We could go on to slicks if you want," suggests Leclerc.

Verstappen is back on track, on Inters, and immediately goes quickest in the opening sector. Losing a little pace in S2 he finally crosses the line at 30.611 to go second.