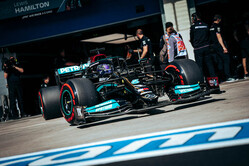 Hamilton, who has a 10-place grid penalty on Sunday after receiving a fourth ICE, was quickest, out-pacing title rival Verstappen by 0.425.

Though Sainz starts from the grid after taking a while new engine, Ferrari was looking good with both cars in the top five. The Alpine pair, Norris and Gasly also looked good.

Interestingly, the combination of softer tyres and a water-blasted track surface has led to times being around 10s quicker than last year.

The lights go green and Giovinazzi leads the way, followed by Schumacher, Mazepin, Raikkonen and Leclerc.

Soon all twenty drivers are on track, sporting all three compounds.

The silliness gets underway even earlier than usual, as Stroll literally stops in the middle of the track in order to create a gap, as do a couple of others. Hamilton has to take avoiding action.

"I have no front," complains Hamilton as his time is deleted for exceeding the limits at Turn 1.

A spin for Latifi in Turn 9.

Leclerc goes top with a 24.102 as Verstappen complains that he's getting "weird snap sounds" in the mid-corners.

Following that burst or early activity there's a bit of a lull before Alonso, Latifi, Stroll, Russell and Vettel head out, all on softs, for their qualifying sims.

Norris is one of several drivers caught out by the tailwind in Turn 3.

Quickest in S1, Hamilton subsequently crosses the line at 23.840, having lost time in S2.

As Verstappen begins his first flying lap, Ocon and Gasly have their times deleted for exceeding the limits in Turn 1.

PBs in all three sectors are only good enough for fourth for Verstappen (24.736), who is 0.896s off the pace. Moments later however, he is demoted by his Mexican teammate who posts 24.373.

Hamilton improves to 23.804 as Verstappen complains that he "keeps losing the rear".

Other than Turns 1 and 3, Turn 9 is proving problematic for a number of drivers.

"My arms are too short to turn the wheel," advises Gasly, referring to his issue with understeer.

"How is it so f****** difficult to do simple things," moans Raikkonen as his crew continues to work on his leaky drink system. Seemingly, it was leaking into his helmet until the Finn disconnected it... hence it leaking into his "f******" boot.

Leclerc consolidates second with a 23.970 as Bottas misses Turn 1 completely.

As Verstappen complains about messages he's getting on his dash, the Dutchman appears to have an edge to his voice.

"Front are dead man," says Mazepin following an off at Turn 8.

The session end, and while Hamilton has that grid penalty, Red Bull must be concerned with Verstappen's understeer issue and that 0.635s gap.

As the session ends the drivers head to the grid for a practice start, unfortunately there's an issue and Ocon doesn't get away. He is told to switch off.