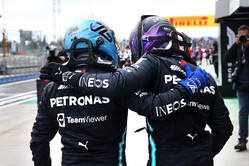 Lewis put on a commanding display on Saturday in Istanbul, finishing P1 in all three qualifying sessions but will incur a grid penalty for tomorrow's Grand Prix as a result of changing his internal combustion engine (ICE).

A strong performance from Valtteri saw him finish Q3 just 0.1s behind his teammate to go second quickest in what would have been a front-row lockout. He will inherit pole position for tomorrow's race, which both drivers will start on the Medium compound tyre.

Yet again this season, changeable weather conditions and rain showers made tyre selection and the timing of runs extremely difficult for all teams.

Lewis Hamilton: It's so good to be back in Turkey, last year was an unbelievable visit here for myself and the Team! Coming back, the track is completely different - the grip level we've got now is absolutely awesome. The session today was really tricky because there were still some damp patches and getting temperature into the tyres for the first lap wasn't easy. But it was a really, really great job by the Team, they got us out at the right time and put in a great performance. Tomorrow is going to be difficult, but I'll give it everything! Overtaking isn't the easiest at the moment and we're all on the same tyre so I imagine tomorrow is going to be difficult to move up. We've got the long straight down the back so we'll see what we can do. Hopefully we can give the fans here a good race!

Valtteri Bottas: Today was a good Quali - not easy conditions, especially in Q1 which was on the edge with the damp parts and still in Q3 there were damp sections but I put together some good laps! On the final lap, I missed a little in the last sector with some understeer but other than that, the lap was really nice. I enjoyed it and obviously as a team result, today was pretty ideal.

Max is starting next to me and the Ferrari has looked strong this weekend, so it'll be a tough race but we'll give it our all. We have a good race car, I just need to keep the focus on my own race, avoid mistakes and stay ahead. Strategy will always play a part but I'm feeling confident and looking forward to the start and getting the job done.

Toto Wolff: The big positive today is that the car is very quick and Valtteri starts on pole tomorrow, but the negative is that it would have otherwise been a weekend with a front-row lockout for the team. Progress will be tough for Lewis with all cars in front of him other than Tsunoda starting on the Medium tyre and yesterday in the long-run we could see that it's difficult to follow here. But Lewis has made phenomenal recovery drives time and time again, and there's no one else you'd want in the car. Strategy will play a big part and we'll be there to support him. Valtteri has been strong all weekend and he has got a great opportunity tomorrow. He clearly wants the win and it will also help Lewis so he'll be going all-out for it.

Andrew Shovlin: A great job by the team and drivers on a front row qualifying and well done to Lewis on getting P1 today. That was close to the perfect result for us; not quite perfect as we'd have preferred Lewis to be on the Hard tyre for the start tomorrow but that felt like we'd have been taking too much of a risk getting through to the final session given the tricky conditions. Lewis drops back with his engine penalty but it's great that Valtteri inherits pole; he's been on strong form recently and has everything to play for with nothing to lose tomorrow. It's going to be interesting to see how the car and tyres perform tomorrow. Clearly everyone is wary of the Soft tyre and most have kept their options open for the race as far as tyre choice is concerned. Our long runs were looking good on Friday, both in terms of pace and degradation so hopefully we can achieve our goals. It's going to quite a challenge for Lewis to fight through without a tyre advantage. There are some strong cars in that midfield pack and Sergio won't be doing him any favours but we've seen brilliant recovery drives from Lewis in Imola, Silverstone and Budapest so hopefully he can make it happen once again.