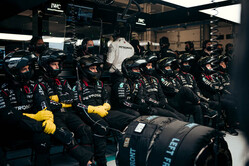 Though Lewis Hamilton could have made his tyres last until the end of the Turkish Grand Prix, Mercedes chief technical officer, James Allison insists that pitting the Briton was the right decision.

Though directed by his team to pit, Hamilton Continued to argue with his engineers before finally stopping for fresh inters on lap 50, the last person to do so.

At the time he pitted he was third, rejoining in fifth. However, like Charles Leclerc, who pitted on Lap 47, the Briton was now out of synch with the majority of the field, and about to encounter the graining phase that they had already gone through.

The consequent effect on his car's handling meant the Briton was unable to make up ground on the cars ahead, whilst becoming increasingly susceptible to an attack from Pierre Gasly and Lando Norris.

While Allison admits that Hamilton could have made his original set of inters go the distance, he would have lost considerable pace and would have likely finished seventh or eighth.

"In all likelihood, we would have got to the end of the race on one set of tyres, able to circulate without difficulty," says the Mercedes chief technical officer in the team's post-Turkey debrief.

"The question is, how quick would we have been? And the evidence there is pretty clear: we would have been very slow. Lewis's lap times were starting to get worse lap by lap by lap, and while he would have made it to the end of the race, the pace would have been quite dismal by the time he got there."

With the benefit of hindsight, Allison admits that the best strategy would have been to pit Hamilton around Lap 36 or 37, the Briton admitting that stopping on Lap 41 would have been "a fourth place type of stop".

"You can see why, if you are playing a hand of poker like that, you are going to choose the best option and the best option for us, having missed out on the earlier call, was to come in and secure that fifth place," said Allison.

"It was a very good performance, the car was very well-balanced, we didn't seem to suffer as much from the understeer that was fairly prevalent up and down the pit lane this weekend. But I don't think you could read that automatically into the races to come.

"One of our engineers this weekend spoke about the tyres as being in a sort of Goldilocks place this weekend, not too hot, not too cold on an asphalt that is particularly picky.

"We knew that we were very strong but we also knew that the margins between this strength and being more average were quite slender. A few degrees here or there and we could have been out to the Goldilocks zone on the hot or the cold side."

Though it has only won three races since Silverstone, Allison believes the updates introduced at the British Grand Prix have made all the difference.

"At Silverstone we put a decent upgrade package on our car, and it has sort of made our season a happier place," he said. "In the races since then, I think there has only been one where we were comprehensively beaten and that was Zandvoort.

"On the others I think arguably we have shaded it with the quickest car and in a couple of places like Istanbul, Sochi we were proper good, Monza too, good as well.

"So, on average I think we have shaded it but in most of those places where we have been the quicker car, it has been more of a sort of coin toss than a sort of guarantee.

"What I think that means is that we at least are in the fight. You know, if we can work well with our car over the races to come, we have something that does look competitive enough to be in that fight.

"There is more than just speed that will determine the outcome of these races though, as the last several have shown us.

"It's a thrilling season and these last few races should make this a season that will be thought of for many years to come as one of the classics in F1."