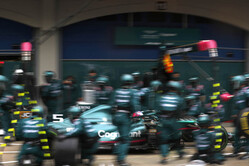 Sebastian Vettel has taken responsibility for the disastrous decision to switch to slicks during the Turkish Grand Prix.

Quickly despatched by Lewis Hamilton at the start, the German was running tenth, behind Carlos Sainz, when most of his rivals began to pit for fresh Inters.

However, the four-time world champion, widely regarded as one of the sport's true 'Regenmeister's', made the surprise decision to switch to slicks, fitting a set of mediums.

It was a decision he immediately regretted, as he struggled to keep his Aston Martin on track, slipping steadily down the order as he slowly made his way back to the pits for another set of Inters.

Asked who made the call, he replied: "Together, but in the end I made the decision, I wanted to try to go for it.

"On the inters there was nothing left," he continued, "so I thought the dry tyres could be as good but I couldn't break them in and just had no grip and lost so much time as I couldn't make them work.

"It was worse than I expected," he admitted, "even if it was damp a little bit here and there, or wet. But the main thing was I couldn't break the tyre in and then you are just sliding on the top.

"It is a no-brainer now," he sighed, "but at that time I don't know. I was tempted some laps before and the inters were not getting any better. If you look at the inter tyres there is nothing left on them, they look like a slick, so I think I had reason but obviously it was the wrong decision.

"I am obviously disappointed having made the wrong call, but on the other hand, it was tempting to try but it was the wrong decision. We lost the run for points, maybe one or two but in the end, we didn't get any."