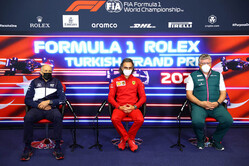 Franz, can we roll it back to the last couple of races. Both Monza and Sochi, difficult ones for the team. What are your goals for this weekend in Turkey?
Franz Tost: Not to repeat the last two races, because Monza and Sochi was really a nightmare. We didn't score any points, too many mistakes and failures on the car, retirements and so on. And I hope that here in Istanbul we come back to score points.

The car in Sochi in particular looked really competitive. What lessons have been learned from that race weekend?
FT: Sochi was a difficult race, as you all know, a shower came and we decided with Pierre to stay out - but this was a completely wrong decision, as we know now and you know, if rain is coming it's always difficult to estimate how much water will come down and we thought after the first shower it will stop. Therefore we decided to stay out with Pierre. It was a wrong decision, should have called him in, should have put on the Intermediates earlier, and then I think he would have been in a better position to score points.

So when you've had a difficult moment like that and you've rolled the dice and it doesn't work, how does that influence your thinking going forwards?
FT: First of all, we are sitting together, we are analysing what we did wrong, what we have to do better in the future. We had a couple of meetings from the operational side to improve the work at the track, especially during the race if such conditions are coming up there - and I hope the decisions we made are positive, if in the second half of the season we are coming once more in such a situation, to be better positioned and make the right decisions.

Would you roll the dice again?
FT: That depends. On the one hand, yes, because if you don't risk anything, then it's difficult to win. But you have two cars and maybe you can split the cars. We could have, for example, put on the Intermediates on Yuki's car instead of the dry tyres because, as I mentioned before, we through it will stop, the rain, and therefore we put on the Soft tyres - but as we know now, this was a wrong decision. We should have put on the Intermediate tyres. In the future, if one car is still out with the dry tyres, we say OK, but then we go to a safe car with the second car and put on the Intermediates. There were a couple of other points and topics which we discussed and I hope that we are now settled for conditions in the future.

Laurent, first of all, what are grip levels like around the track here in Istanbul?
Laurent Mekies: Actually, the grip level was surprisingly high this morning. I know there was a lot of questions after the last race, we were all very surprised last year with the low level of grip which we knew was the result of the very late resurfacing of the track. But I must say well done to everybody involved because it seems to be back to normal here. So, I think all the drivers have enjoyed a much higher grip level compared to last year. We'll see how it will evolve during the weekend but certainly we are in a much better place than last year. So, well done to you guys, the FDA, and everybody else that has been involved.

Can we talk power units now? The new one has completed a race distance with Charles in Sochi. What did you learn about it there?
LM: The main target of this new hybrid system for us was to anticipate some of the work we are doing for next year. So we were trying to validate the direction of development we have been taking on the PU development for next year. We fitted it on Charles', it worked in a very smooth way through the weekend, which was the first objective. Performance-wise it was never going to be a game-changer - nothing is nowadays, it's small steps - but it was a step in the right direction and we are pushing forward with Carlos this weekend.

As you say, Carlos is taking it. Of the remaining races, is this the optimal track to do that and to take the grid-place hit?
LM: I think if you ask your strategy people when is the optimal time to do it, they will always want to do it as early as possible because you want to take the penalty and then enjoy the benefit of the new PU for as many races as possible. The short answer is, if you have decided to do it, you want to do it as early as possible as you are capable to do so. That's what we have been doing, pretty much. We have done it quite well in advance, compared to our initial plan, with Charles last week and now we do Carlos.

Otmar, first of all, let's talk about some great memories from Turkey last year. Of course, Lance on pole, Checo finishing second for Racing Point. Do those memories give the team a lift coming into the weekend?
Otmar Szafnauer: Yeah. Last year was significantly different, if you remember the very wet conditions and very slippery track. I think it will be different this year. The memories are still with us and what could have been had Lance not had his strake get stuck between the other strakes, which meant his front wing wasn't working - because I remember he had a significant lead. But still, great for the team last year but I think it will be different this year, including the weather.

While we're on the subject of drivers, your guys have tripped over each other at the last couple of races, particularly in Sochi. Have you felt the need to get involved yourself?
OS: No. They spoke about it after and I was there and Lance was apologetic. He didn't see Seb coming around him and just moved over to take the corner and Seb happened to be there, so yeah, there is no need, they're completely fine.

Final one from me Otmar. Martin Whitmarsh started at the team last Friday, first of October. How is his arrival at the team impacting you?
OS: Martin arrived on Friday so it's only been a couple of days that he's been there before I left to come here. He's getting to know the team and some of the other strategic things that he was hired to do, as we're marching our way down getting those things done. There's a lot happening at the team and we welcome Martin. He can help with his experience. We're building a new factory now, we're building a new wind tunnel, for example, and there's a lot happening back at base, even when we're out racing, so it's nice to have his experience.

You use the word 'strategic'. Is that his role? Is he more of a strategic thinker? Is he going to be coming to all the races?
OS: He's group CEO which by mere definition means you have a bigger role and a wider roll. He will be coming to some races. I think he'll be coming to Austin and then perhaps one more race this year and then a few next year.

(Dieter Rencken - Racing Lines) To all three, as far as the championship is concerned we're heading towards the last quarter. Who would you tip as World Champion for this year, having looked at the past races?
FT: Personally, I hope Max Verstappen will be, clearly.

LM: It's difficult to say. It's a great fight. It's after, whatever, 15 races or more, they are two or three points apart. It's great to see. Looking from the side, it seems that we will see a bit more speed in the latest races with Max but I'm sure it's going to be a very tough fight until the last race.

OS: Very difficult to predict, just because they are so close, they're two great drivers fighting for a World Championship that's very valuable. Hard to say: Lewis is very experienced. He knows how to win World Championships. Max is very fast, so let's watch and see. We only have a quarter left and we'll know.

(Julien Billiotte - AutoHebdo) Question to Franz please. Franz, do you think there is a sense of regret from Honda for perhaps deciding to leave Formula 1 too soon? Because yesterday there were more details about the future cooperation between Red Bull Powertrains and Honda. It almost felt like they wished they continued with you guys properly.
FT: I can't talk in the name of the management and of the board from Honda. But, as you know, the great manufacturers, there are some people, some managers who were happy to do Formula 1 and others that think the company should go in another direction. Honda has decided to go out from Formula 1 and nevertheless there is a close cooperation with Honda and Red Bull Technology in the future. Whether then Honda will come back, I don't know. Currently, they have decided to stop at the end of this year and will provide us and Red Bull Racing with engines in 2022 and from 2023 the engines will be designed and built by Red Bull Powertrain Technology Group and the rest we will see.