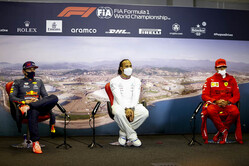 Lewis Hamilton you have just won your 100th grand prix. Tell us, how does that feel?
Lewis Hamilton: I just want to start by saying thank you to all these fans. We have such a great crowd here. I know it's not been the best of weather but what a race it provided. So a big thank you to everyone in Russia for having us. It's taken a long time to obviously get to 100 and I wasn't even sure whether or not it would come. Lando did such an amazing job. He had incredible pace. He's doing such a great job for McLaren. It was very bittersweet obviously to see my old team ahead. They are doing so well. They obviously won the last race. They are doing fantastic and obviously powered by Mercedes. It's good to see them united again. Obviously the team made a great call at the end. I didn't want to let Lando go and of course I didn't know what the weather was doing but I am incredibly grateful to all these men and women that are here and back at the factory, because, wow! One hundred!

A little sense of relief because after yesterday's qualifying you were a little bit in the wars and emotionally it was a bit up and down, so how do you feel having finally overcome this here in Russia?
LH: Yeah, going to bed last night, obviously not the happy with the job I did yesterday. I watched the replay over and over again and there were subtle, subtle mistakes but just not ideal and I was so determined when I came in, when I woke up this morning. I woke up with a bit of pain in my neck but Ange worked on it, she's been fantastic the last two weeks. I couldn't have done it without here. I was just determined to do the best job I could. It was tough. I lost a lot of ground at the start, just trying to stay out trouble. Obviously Max must have done a really great job to come up to second from last, so yeah, we've got our work cut out.

A little bit surprised to see Max so close at one time, of course he was a little bit further back but then the rain came, and some decisions about when to come in or whether to come in and put on inters?
LH: Yeah, I don't think, I'm not sure... It would have been tough to get past Lando. He had great pace. He did the fastest lap, so it would have been tough to get past him unless we got traffic or something or he made a mistake, which he has not been doing at all. Then the rain came and it was very opportunistic and as I said the team did an amazing job so a big, big thank you to them. There's nothing I can do about who is behind me. That's a dream result for Max, naturally, but I'm grateful for the points.

Max, well, all the way from the back to the podium but not only the podium - second place? What do you say about that? A little bit of luck with the rain, but did you heart sink at any moment during that race; you were stuck a little bit.
Max Verstappen: It was pretty tricky on the in-lap to make the call to go to inters but at one point it was really, really slippery. I think we decided at the right time to pit, because if we would have gone one lap earlier your would have probably destroyed the inter in the last sector, but of course to come from last to second is very, very good. The race itself was not very easy because it was very difficult to pass again and once you got stuck it was very easy to damage your tyres. Luckily with the rain it helped us to make that last jump.

In this championship, did you think this was a race you thought you were going to have to maybe not get a lot of points from? You must be delighted to have come second?
MV: Yeah, with the penalty we had and to only lose one spot basically is definitely not too bad. When I woke up this morning I definitely didn't expect this result.

Anyway, there was enough of a gap that you two didn't manage to get on the track at the same time and close enough to have to go wheel-to-wheel again. Quite relieved that you got a clean race under your belt and that you got some points.
MV: Yeah, I mean, especially from the back. A lot of things happened, also on the first lap and even in the first stint. With other cars fighting each other you just have to stay out of trouble and stay clean and I think we managed that really well. And then the crucial call to go to the inters worked out.

Carlos, well how about that? Leading a grand prix there for a while. We thought for a moment that you and Lando had some kind of plan worked out.
Carlos Sainz: Yeah. Well, first of all I got a good launch. That was the priority: not to lose position too much to George. And then I managed to tuck in behind Lando and do a bit of a send around the outside into Turn 2, which worked perfectly. Then unfortunately graining came and that's when our race started to go bad. We started to suffer a lot. We had to go very early onto the hard, a lot of management on the hards. And then finally the rain came at the worst possible time because my hard tyres were going away and we boxed, we did exactly the right call at the right time and we managed to get back into P3 and a very strong race in general.

Lewis, what a race. There are so many talking points but let's start with that headline: your 100th win. What an incredible milestone. What does it mean to you?
LH: It's a magical moment. I could only ever have dreamed of still being here and having this opportunity to win these races and get to drive against such phenomenal talent this late in my career and to continue to building with Mercedes, of which I'm so proud of everything we've done, not only on track but also off and yeah, this is just a special moment for everyone that has been a part of it. I've had the most incredible team. Back home in my little personal team at Project 44 and then obviously you've got Angela, you've got Ellen, you've got Omar my driver, you've got Lloyd who's here with me, my security. Honestly there are too many to name, but ones that have been with me since 18 years. Just forever grateful to them for their continued support and belief in me. To my parents also. My dad... Even just last night, just the same as the first race I had or the first championship I fought in when I was eight, my dad messaging or called me last night and he has always been that one reassuring me and continuing to support me, so yeah. And as I said, there were moments where you didn't even know that if it was going to happen. So, I feel incredibly grateful for the amazing support I have had. Especially to Team LH. Team LH Russia and all over the world they have been absolutely magical for so long. I couldn't have done it without them.

Coming on the race itself. So much to discuss but let's start with that call for intermediate tyres at the end. Was it yours? Was it the team's? You looked to stay out at their first request if it was the team's?
LH: Yeah, firstly I can't take credit for that amazing decision, that was the team's. For me, I was very much in no-man's land for a long time in terms of... I didn't really know where I was in the race. I had no idea how far Lando was ahead. I was just trying to set the best time every lap. Once I got past one of the McLarens in my second stint, getting past people, chasing down Lando. They were incredibly quick all of a sudden. He was doing a really great job. Just in those last moments, it was slippery in 5 and a little bit in 7 but then everywhere else grip was pretty good. Lando went off I think in 5 on one lap and I was like 'OK, OK, stay out, it's most likely going to happen again, I'll try to catch him out'. Then they called me in and I was like: 'Yeah, but he's right there!' I only had three laps to catch up 24 seconds, so it was like 'no way'. So I wasn't convinced the first lap. The next lap it rained more and I was definitely more convinced then, so I came in.

Lewis, just a word on Lando. I saw you have a chat with him in the pen outside. Can you sympathise with how he's feeling now?
LH: Yeah, for sure. He's so young, he's got so many more wins up ahead of him. He did a fantastic job yesterday in the wet. He's doing a great job leading that team, and look, McLaren won the last race, they've been very hard to beat for us all, but yeah, just blind faith at the end there. I put all my faith in my team and they called me in and I believed them - and that's part of our journey together. It could have played out any way - but I think our team did a great job in terms of understanding where the rain was coming and it was going to get worse and they were 100% worse. Of course, I had to play my role to try to get us in that position in order for that to work. Team-work makes the dream-work.

Max, last to second. It was a brilliant drive. Does this feel like a victory for you in many ways?
MV: It definitely felt very good crossing the line, you know, we all know how hard it is to pass and especially with the midfield being so competitive this year, it is really hard to get by and also that was shown again today. I of course got by quite a few but then, yeah, at one point you just get stuck. Today also was very hard on the tyres. I think they were just graining and opening up very quickly, so then you just lose a lot of grip and it makes you stuck even more and you just can't really attack any more. We just stayed calm, stayed focused, just tried to follow them and basically yeah, when the rain came, I think at the end of the day we made the right call and the right lap to box - because the lap before probably, if we would have boxed, I would have destroyed the Inters in that one or two laps because of it still being a bit too dry for two-thirds of the track. So yeah, to basically go from seventh to second for us was, of course, today an amazing result.