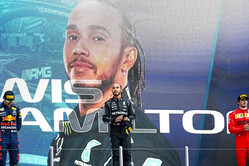 Starting from fourth on the grid, Mercedes driver Lewis Hamilton claimed his 100th Formula 1 victory and regained the world championship lead. Like almost every driver, he completed a two-stop strategy, switching from the P Zero Yellow medium C4 to the P Zero White hard C3 on lap 27 and then to the Cinturato Green intermediates in the final laps as rain fell. He hunted down McLaren's Lando Norris, who led for the bulk of the race from pole but only went onto intermediates on the final lap, falling down the order and eventually finishing seventh.

Red Bull's Max Verstappen went from 20th on the grid to second, starting on the hard tyres before switching to the mediums and then the intermediates with three laps to go.

The majority of drivers started on the medium tyre, with seven beginning on the hard. Before the rain, all the drivers ran the two theoretically fastest strategies: medium to hard, or hard to medium.

Mario Isola: "After yesterday's wet conditions, the rain held off until the final few laps - and it decided the race. Up until then, the drivers had made the most of dry conditions with maximum tyre freedom, as they could choose their starting tyres and they all had a full unused allocation of slicks. The 'reset' track following the rain led to a bit of sliding and graining at the start of the race, but this was soon overcome. The hard tyre's resistance to abrasion proved very well suited to the conditions, with some very long stints of more than 35 laps, while the medium also did 28 laps in the hands of Lando Norris. Ultimately though, it was the intermediate tyre that made the difference, with the teams able to use their experience from a wet qualifying to extract the maximum performance from it when it mattered at the end."