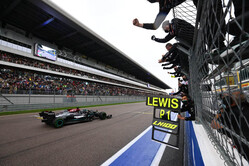 As if the Russian Grand Prix wasn't already shaping up to be entertaining, fans, the media and much of the paddock awoke to a curve ball from Mercedes this morning, as the German team revealed that overnight Valtteri Bottas had received a number of new power unit elements.

This means that the Finn drops 15 places to 16th on the grid.

With Toto Wolff having admitted yesterday that Mercedes was "still thinking about possible strategic decisions" for Bottas - who qualified seventh - and "what the best and quickest race strategy could be for him", it's not too much a stretch of the imagination to conclude that what the German team was really thinking about was what was best for Lewis Hamilton.

Already up against it in starting at the very back, what with Charles Leclerc and Nicolas Latifi to contend with - not to mention the ever squabbling Haas duo - Max now has the added hassle of a Mercedes... a Mercedes driven by a man who, only on Thursday, admitted that he was ready to "take one for the team".

All those convinced that now essentially a 'free man' ahead of his move to Alfa Romeo, Bottas might go for it and mount his own title challenge may have to think again, as the Finn gives up an almost certain podium in order to cause problems for his team's title rivals for every lap that Bottas can keep Verstappen at bay gives Hamilton a massive advantage.

Sadly, it is not as though Sergio Perez can play a part for once again the Mexican is well down the order due to his lack of single lap pace.

While we anticipate Max's potential fight back, the fact is that Mercedes strategic move has made his job that much harder.

As far as Hamilton is concerned, the pressure is off somewhat, for the Briton merely has to bring the car home with a decent haul of points. He does not need to take any unnecessary risks by going for the win.

However, thus far it has not been the easiest of weekends for the Briton, having knocked over his front jack-man on Friday, the world champion made two needless, and costly mistakes during Q3. Indeed, Hamilton admitted that it was a poor performance.

As ever, the start will be crucial, and though there is talk of a gentleman's agreement between pole-man Lando Norris and Carlos Sainz, this will not extend to the mob behind.

2022 teammate George Russell will no doubt move aside for Hamilton, but Ricciardo, Alonso, Stroll and Perez will be keen to claim position from the get-go.

In the wake of recent controversies, we're talking Silverstone, Hungary and Monza, what the sport doesn't need is another (racing) incident, and should it involve Bottas it would be hard for Mercedes to prove lack of intent.

Having had some fun yesterday, don't rule out the Weather Gods making an appearance this afternoon, for depending on who you trust there is every likelihood of some rain.

As the wet-weather tyres were used during Q2, the drivers will have a free choice of starting tyre.

If it's dry, it should be one-stop race, unless there's a safety car or any other anomaly.

The pit lane time loss is quite big at around 25 seconds: another factor that drives teams towards a one-stopper.

Mediums to hards is set to be the preferred strategy because this allows the greatest degree of flexibility, with a wide pit stop window that maximises opportunities to take advantage of safety cars or other race circumstances. Softs to hards is also a viable possibility, while softs to medium is marginal in terms of wear.

As always, there's the option to do something completely different and start on the hard compound before switching to a softer compound much later in the race, but that is more of an unknown quantity. This might be a good option for those starting lower down the grid, to carry out a longer first stint. With three of the frontrunners starting at the back due to engine changes, it will be interesting to see which tactics they choose.

Air temperature is 19.1 degrees C, while the track temperature is 22.3 degrees. However, there are dark clouds in the distance. Indeed, race control confirms there is a 70% chance of rain.

As Alonso locks-up and takes to the escape road, Mazepin complains of an issue with his steering rack.

They head off on the formation lap as Norris is warned that light rain is anticipated within the next 5 minutes and will last 15 minutes at most.

"My battery is draining, I don't know what's going on," reports Verstappen, before adding: "All good now".

They're away! Norris gets away well, as does Russell, and heading towards the kink that is Turn 1 the Williams edges ahead of the Ferrari. On the run to Turn 2, Sainz, benefitting from a tow from the leading McLaren, edges out Russell, then nips out and around Norris into the corner.

Meanwhile, Hamilton attempts to go down the inside, while Stroll, following a brilliant getaway, holds fourth, ahead of the Mercedes.

Alonso takes to escape road at Turn 2 - confirming that his earlier off was a rehearsal.

As Sainz leads Norris and Russell, Hamilton, Ricciardo Alonso and Stroll battle for fourth. As Hamilton battles Ricciardo, Stroll and Alonso are through.

The Australian harries Alonso, with Hamilton keeping a watching brief, with Perez just behind. The McLaren out-brakes the Alpine in Turn 13 to take 5th.

At the end of lap 1, it's: Sainz, Norris, Russell, Stroll, Ricciardo, Alonso, Hamilton, Perez, Ocon and Raikkonen. Verstappen is up to 17th, while Leclerc is 12th and Bottas 15th.

Hamilton make a bold move on Alonso at T3 to take 6th as Tsunoda spins and drops to last.

As Verstappen passes Latifi for 16th, at the other end of the field Hamilton posts fastest lap (42.034).

Next up for Verstappen is... Bottas. However, the Finn passes Mazepin to give himself some breathing space.

After 3 laps, Sainz leads Norris by 1.5s with Russell a further 4s behind. The Briton leads a train of cars that includes Stroll, Ricciardo and Hamilton, who has Perez hard on his tail.

Verstappen makes quick work of Bottas as he passes the Finn - with surprising ease - at Turn 13 to take 14th.

While there is a train of cars behind Russell, so there is another behind Raikkonen in 10th.

Verstappen is advised that Hamilton is sixth with Perez right behind.

"Try to stay close to Verstappen," Bottas is told, "Gasly might move out of the way." Moments later the Dutchman passes the AlphaTauri on the back straight courtesy of DRS.

After 8 laps, Norris has closed to within 0.8s of Sainz.

Hamilton complains of graining with his left-front.

Leclerc makes a move on Vettel but his former teammate isn't having it. However, an opportunistic Verstappen catches the Ferrari driver on the hop, he's through to take 12th.