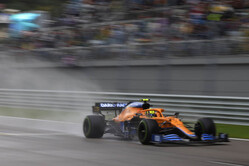 With the F2 and F3 races postponed due to the conditions it came as no surprise that FP3 was cancelled.

Over the course of the morning we have had torrential rain, thunderbolts and lightning - which was very, very frightening - but then forty minutes before qualifying the sky began to brighten... indeed, there were even patches of blue.

However, while the rain has stopped, this being a flat, featureless track there is the issue of standing water.

Also, as ever there is the issue of the medical helicopter, and while it may be clear to take off from the track there is an issue in terms of landing at a nearby hospital.

Bottas was quickest in both of yesterday's sessions, ahead of his teammate. Of course, with Verstappen starting from the back of the grid - as is Leclerc - following an engine change, this is something that Mercedes must capitalise on.

Of course, while qualifying as near the front as possible in important for Hamilton, so too is the need to keep out of trouble this afternoon... or whenever qualifying takes place.

In the moments before Q1, Christian Horner admits, understandably, the Perez desperately needs to qualify as near the front as possible.

The lights go green and Gasly leads the way, followed by Sainz, Alonso, Leclerc and Raikkonen. As more cars emerge, all bar Alonso are on Inters. The Spaniard opting for full wets.

As the Mercedes pair head out, so too does Verstappen.

At which point it begins to drizzle...

Understandably, due to the conditions, there are a few wobbles.

Gasly posts an exploratory 51.519 and Tsunoda 55.053 as Ocon is told that no rain is expected during Q1. However, Latifi is told the exact opposite.

Verstappen pits without posting a time.

Giovinazzi spins in Turn 16 and is lucky not to collect Leclerc who was just behind.

Verstappen climbs from his car, the Dutchman's work done for the day.

Ricciardo goes eighth but is demoted when Stroll posts a 49.034 to go sixth.

Alonso switches from the full wets to Inters.

A mistake sees Bottas take to the escape road at Turn 2, as Perez goes quickest in the opening sector. The Mexican maintains the pace in S2, finally crossing the line at 46.455.

Alonso goes thirteenth on the Inters, before improving to third (47.990), thereby splitting the Mercedes pair.

With under three minutes remaining, along with Verstappen, the drop zone comprises Raikkonen, Schumacher, Giovinazzi and Mazepin. Russell, Ricciardo, Tsunoda and Sainz are hovering.

Bottas goes quickest with a 46.396 as Perez spins at Turn 2 briefly bringing out the yellows.

Ricciardo improves to ninth but is instantly demoted by Stroll.

Russell can only manage 15th, while Tsunoda remains 14th.

A 47.238 sees Norris go fourth, while Raikkonen fails to improve.

Hamilton maintains his pace, finally crossing the line at 45.992.

Q2 gets underway, and with an eye on the skies there is no hanging around as Gasly once more leads the way. Inters remain the order of the day.

Alonso goes fifth, ahead of Tsunoda, Vettel and Sainz.

Russell goes quickest in S1, eventually stopping the clock at 47.335 to go ninth.

Quickest in the first two sectors, Bottas loses time in S3 but still manages to go quickest courtesy of a 45.506.

Stroll goes fourth with a 46.439 as Hamilton leapfrogs his Mercedes teammate with a 45.406.

While it is understandable that we haven't seen Leclerc, Latifi has also failed to appear.

Bottas told he is losing out to his teammate in S1.

Russell goes eleventh, as Gasly claims he has been impeded by Latifi who has finally appeared.

Perez is currently sixth, 1.118s off Hamilton's pace. The Mexican subsequently improves to 45.834.

Alonso goes third and Russell ninth, which is bad news for Vettel, while Gasly also fails to make the cut.

"Nicky chose not to set a time in Q2," reveals Williams. "After discovering a pneumatic problem overnight, the team opted to take a fresh power unit and he will therefore start at the back of the grid tomorrow."