Verstappen to start Russian GP from back of grid 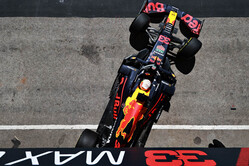 Max Verstappen will start Sunday's Russian Grand Prix from the back of the grid after Red Bull elected to change his engine.

Heading into the weekend it was always possible that the team would make the decision, and with uncertainty over Saturday's weather the decision was made to take the engine change that was inevitable and with it the penalty.

According to team boss Christian Horner, the move was greatly influenced by the uncertainty over Saturday's weather, with heavy rain predicted for much of the day.

Indeed with officials expecting a wash-out - the F3 race having been moved forward to today - it could well be that Sunday's grid is based on the order at the end of FP2.

The penalty also negates the 3-place grid penalty handed to the Dutchman following his clash with title rival Lewis Hamilton at Monza.

Verstappen will be joined at the back of the grid by Charles Leclerc who has also take on a new engine.

While this will play into Mercedes hands, there is every likelihood that at some point Lewis Hamilton will have to take on a new engine, which will mean a similar penalty.

"Taking everything into account, it was best to take the engine penalty here in Sochi," said Verstappen.

"It will be a challenging race," he admitted, "but so far I’m happy with today's running and our work on the race set-up."