"We will both be professional," insists Hamilton 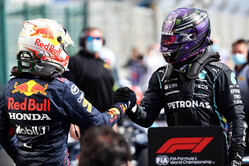 Lewis Hamilton plays down talk of further clashes with Max Verstappen, whilst suggesting that title challenge is putting the Dutchman under huge pressure.

Understandably, the talk of the Sochi paddock ahead of the Russian Grand Prix is the events at Monza two weeks ago and whether the sport can expect more of the same.

With eight races remaining, Lewis Hamilton and his title rival, Max Verstappen, are separated by just 5 points, and in the wake of the clashes at Silverstone and Monza, to name but two, it is widely anticipated that there will be further fireworks between now and December.

However, talking to reporters, Lewis Hamilton insists that being professionals the pair will learn from their mistakes, while suggesting that his rival is under added pressure because it is his first serious title challenge.

"What is important is that we continue to race hard, but fair," said the Mercedes driver. "I have no doubts that we will both be professional and learn from the past.

"I never expect a driver to back down," he added. "That's not how I approach racing with any drivers.

"I think ultimately we all have to be smart and know there is a time you're not going to make a corner but it's all about making sure you live to fight at the next corner. That's really just through experience you find that balance and you know it's not all won on one corner, so there will be other opportunities."

In what some might see as a swipe at his 24-year-old rival, the seven time world champion said: "I know what it's like having the fight for your first championship and your eagerness and you go through lots of different experiences and emotions during that time.

"So as I said I do believe that we will continue to get stronger and I'm hopeful that we won't have any more incidents through the year."

Asked if he thought the pressure is getting to Verstappen, he replied: "Obviously he won't admit to it and I'm not going to make an assumption but I'm just saying I remember what it was like when I had my first one and it definitely mounted up.

"It was difficult, it was intense," he continued, "I was going through a lot of different emotions, I didn't always handle it the best and that's to be expected.

"So I'm just saying I empathize and I understand that, but I know that we will continue to grow from this."

Asked if he is confident that his own vast experience will pay off, he replied: "Time will tell... I hope so.

"Of course it has been an incredibly difficult year. It's not been smooth sailing in terms of our performance as a team with the car and everything, but i hope so. Naturally there's been a lot of learnings over the course of these first 11, 12, 13 races or whatever we've had, so I hope we see that moving forwards."