Wolff and Horner at odds again 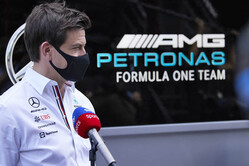 Toto Wolff and Christian Horner have crossed swords once again, after the Austrian described today's clash as a "tactical foul" by the Dutchman.

"The stewards are going to decide who is to blame, who is predominantly to blame," he told Sky Sports.

"I guess we have seen that in the past, but I would say it was, in football, they call it a tactical foul," he added. "He probably knew that if Lewis stays ahead, that is the race win possibly."

Shown footage of the incident, the Austrian opined that Verstappen didn't "look like he was alongside" as they went into the corner.

Reflecting on the incident at the start of the race, he said: "When you look at Turn 4, he backed out and that was quite a thing, because probably, you know that he's staying ahead of you,. And then the incident where they actually crashed. It was clear for Max in there that it would end up in a crash."

Today's incident is the latest in a long line of comings together and near misses, and, ironically, comes in the wake of the infamous Silverstone clash, which also happened on a Sprint weekend.

"If we don't manage that in the right way, and I'm sure that the stewards will look at it in the right way, this is going to continue," said Wolff. "We had a high speed crash at Silverstone. We had one car ending on top of the other one, on Lewis' head here.

"So how far can we go? Maybe next time, we have a high-speed crash and lying on each other."

Reacting to Wolff's claim that it was a "tactical foul", Christian Horner told Sky Sports: "I'm disappointed that Toto would say it would be a professional foul. I think it's a racing incident, and thankfully nobody was injured today.

"I think Max earned enough to be given a bit more space to work with on the left there," he added. "I think you can probably argue it from both sides, so if you take a middle ground on it, you say it was a racing incident.

"But I genuinely think that you could argue Max should have bailed a bit more to the left, you can argue that Lewis should have given him more space.

"I can't see how possibly you could apportion blame more on one than the other in an incident like that," he insisted. "Of course, I'm going to argue on Max's behalf that he earned more space for Turn 2, but you can understand Lewis probably arguing the other way. So I think if you look at it objectively, it's a 50/50 incident. It's a racing incident."

Other than the infamous clash, Sergio Perez, who fought his way up to third but was demoted to fourth after being handed a time penalty for gaining an advantage by exceeding track limits.

Asked if he felt frustrated at today's outcome, Horner said: "Obviously, because I think we had a good car today and we felt we should at least have been on the podium or challenging Daniel. So, very frustrated.

"I think the most important thing today is that the halo has done its job, because it's an awkward accident, with him coming down effectively on top of the Mercedes. Thankfully, nobody was hurt."