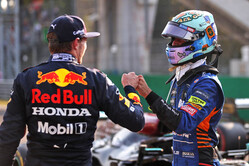 Starting the Italian GP from the front row, Daniel Ricciardo believes the summer break has played a big part in his return to form.

It's an overused terms, but surely 'rollercoaster' is the only way to explain the first half of Daniel Ricciardo's 2021 season.

On arrival at McLaren, many expected the experienced, race-winning Aussie to put younger teammate Lando Norris in his place and become the de facto team leader.

However, the opposite has been true, Norris has risen to the occasion while Ricciardo has struggled, almost from the outset.

Since returning from the summer break however, the Australian has been showing signs of his old self, culminating in a strong, determined performance in the Sprint which - courtesy of Valtteri Bottas' grid penalty - sees the Australian start from the front row alongside former teammate, Max Verstappen.

Ever popular with the fans, Ricciardo believes the summer break played a part in his 're-set'.

"I'll confirm that tomorrow," he laughed, when asked by Speedcafe.com if his recent form marks a return to form. "We've only had a few races but so far, just second half the season, even if I take not even results, just me personally, like internally, I definitely feel a bit more comfortable and better within myself now.

"August was good to really just switch off for a little bit," he continued. "It was hard to get that, and kind of step back and look from afar and kind of gain perspective.

"I think it's definitely helped me return to a better form."

Team boss, Andreas Seidl agrees, the German revealing that the Australian is finally getting to grips with the somewhat unique demands of the MCL35M.

"We can see it in the data, and we see it in the lap times," he said. "And you can see it also in his, let's say, the way he's coming across. Obviously he's in a much happier place, which is normal for the guys when they see that they are back to the performance they expect from them themselves.

"As Daniel said, I think the break going away from the sport for some weeks was healthy for him and helped him to then jump back into the car in Spa and be in a much better place compared to before the break.

"So yeah, very happy with that. Very happy for him, very happy for the team, for his crew as well. It's good to see that all the hard work, they all have put in together as well, first half of the season in the end is paying off now as well."