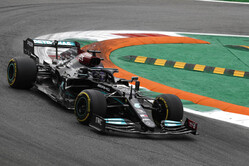 Ahead of today's sole practice session the air temperature is 24.6 degrees C, while the track temperature is 33.9 degrees. Once again it is bright and sunny.

Bottas pole this afternoon, but starts from the back tomorrow after taking on a new engine. Consequently, with the Finn expected to play a strategic role this afternoon, Mercedes will be wanting to practice tactics, not only in terms of slipstreaming but also how the Finn might cede the lead to his teammate should he find himself in that position.

Red Bull will be looking at damage limitation, though once again Verstappen's cause is not helped by teammate Perez only qualifying ninth.

The McLarens qualified fourth and fifth behind Verstappen, but the fact is that it is tomorrow that counts.

There were a few surprises yesterday, not least the Aston Martins and Alpines, and consequently both teams will be looking for ways in which they can improve later.

The big question however, is whether we are going to get through the remainder of the weekend unscathed, as the sport continues to fail to get to grips with the issue of drivers backing one another up in order to clear space ahead of their flaying laps.

This is a worrying practice at the best of times, but at the superfast Autodromo it is exacerbated by the need to get a tow.

To add to this we also saw a number of silly incidents in the pitlane yesterday. Make no mistake, F1 is riding its luck.

The lights go green and Latifi, Schumacher, Vettel and Mazepin are first out. As more drivers head out, it's a mixture of softs and mediums.

Following his issues yesterday, Leclerc is running an older spec engine and will continue to do so for the remainder of the weekend.

Schumacher has to use the escape road at the second chicane after locking-up.

As usual, Ricciardo is receiving advice from his engineer, as Perez goes quickest with a 24.870 on mediums.

Twelve minutes in and the Mercedes pair head out, Hamilton on softs and Bottas on hards, the Finn clearly looking ahead to tomorrow afternoon.

Verstappen, along with the alpine pair, has yet to appear.

Gasly goes second with a 25.116 as Verstappen heads out on softs.

Other than Bottas, the Aston Martin duo are also on hards.

Most drivers are on long runs, however it's hard to compare pace because of the uncertainty over fuel loads.

Second-placed Perez is just 0.436s off his teammate's pace, albeit on the mediums.

"A friendly heads up at Turn 11," Verstappen is warned.

As was the case yesterday - and will continue to be for the rest of the weekend - track limits are an issue, with Sainz the latest to have his time deleted for going wide at Turn 11.

Bottas is advised that his team is seeing "some deg" on the softs.

The session is red-flagged when Sainz crashes at Ascari.

Replay shows him clip the kerb on entry to the chicane and hit the gas just a little too quickly, spearing into the barrier on the outside of the track.

It is the front of the car that is damaged.

Of course, this comes just seven days after the Spaniard crashed in FP3 at Zandvoort, and previously in qualifying in Hungary.

"It's a Red Bull 1-2 at the moment but don't read too much into it," warns Pirelli, "all three tyre compounds are being used and everyone is trying different things. Looks like the medium could be the tyre to have for sprint qualifying."

The session resumes with 21 minutes remaining.

Unsurprisingly there is a queue of eager drivers keen to get back to work. Softs now appear to be the order of the day.

That said, Verstappen has switched to mediums. Russell and the McLaren pair also opt for the yellow-banded rubber.

Hamilton (softs) goes quickest with a 23.246, 0.508s clear of Verstappen, as the Briton finally asserts himself again. Moments later, teammate Bottas, also on softs, posts a 23.468 to go second.

All 19 drivers are on track.

Hamilton makes the switch to hards. His first lap on the white-banded rubber is only 0.294s off his best on the softs. Impressive.

At the other end of the timesheets we have the Aston Martins along with the usual suspects.

As he continues on the hards, Hamilton goes quickest in S2. He fails to improve his overall time but it is clear the hards do have pace.

"I need to stop," reports Leclerc, the youngster sounding unhappy. "I cannot explain here," he adds.

"If you want some running in traffic, box, box," Bottas is told.

An interesting session, but once again, one that poses more questions than it answers.