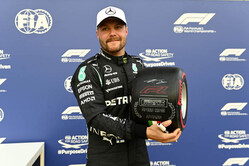 Mercedes driver Valtteri Bottas went fastest in Friday qualifying - which will put him on pole for tomorrow's sprint qualifying race that determines the grid for Sunday's Italian Grand Prix. All the drivers had to use the P Zero Red soft C4 tyre for qualifying today, as per the regulations.

The fastest driver in Friday qualifying during sprint rounds is given the Pirelli 'Speed King' award, which replaces the Pirelli Pole Position Award on events with sprint qualifying. The name of the award is particularly apt this weekend, as Monza is popularly known as the 'Temple of Speed'.

Just one hour of free practice on Friday afternoon preceded qualifying, with the teams condensing their usual data collection programmes into just one hour and running all three nominated compounds. The other Mercedes of Lewis Hamilton was fastest in free practice, this time on the P Zero Yellow medium C3 tyre. Hamilton qualified second on the grid, just behind his team mate but ahead of Red Bull's Max Verstappen.

Qualifying today took place at 18:00 - later than the usual slot - with 27 degrees ambient and 33 degrees of track temperature at the start of the session.

Mario Isola: "As we've seen before at Monza, qualifying was a very strategic session, with cars trying to benefit from a valuable tow on the long straights in order to improve their overall lap times. The overall strategy was made more complex by the fact that the teams also had to consider sprint qualifying for the first time at Monza, as they are free to run whichever tyre they like tomorrow - as well as start the grand prix on whichever compound they like. We saw different strategic approaches in FP1, with the majority of teams using three sets of tyres and all the compounds in just one hour to maximise data collection, while Mercedes, for example, focused only on the medium tyre: which might be a good option for tomorrow's sprint qualifying. Today's qualifying was instead more straightforward than usual as the teams could only run the soft tyre. This coped well with the heavy traction and braking demands of Monza, also providing the mechanical grip needed in the absence of high levels of downforce.