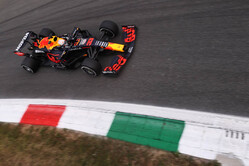 As previously reported, for the second successive weekend, Robert Kubica is replacing Kimi Raikkonen, the Finn having tested positive for COVID last Friday.

The lights go green and there is already a queue of drivers eager to head out, among them big guns like Hamilton and Verstappen.

Most are on hards, though a few, among them Perez, Bottas, Hamilton and Mazepin are on mediums.

On his first flying lap, Leclerc is compromised from the outset having made a mistake at the first chicane.

Meanwhile, teammate Sainz gets things underway with a 25.952.

As Norris takes to the escape road at Turn 1, the Briton having previously complained that his brake pedal is spongy, Verstappen goes fourth with a 24.662.

As Russell begins his first flying lap, Leclerc posts a 24.120 to go second.

Having had a close encounter with Tsunoda on the back straight, Verstappen subsequently gets it wrong at the first chicane and has to use the escape road.

However, both are demoted when Gasly crosses the line at 23.778.

On mediums, Vettel goes fourth with a 23.574, as Hamilton takes to the escape road at the second chicane.

Giovinazzi, currently 18th, reports that he has an issue with his seat - not something you'd want at any track but particularly Monza.

Switching to mediums, Verstappen improves to third, albeit 1.087s off Hamilton's pace.

Norris complains of lack of (rear) balance and understeer, as Perez bolts on a fresh set of mediums.

Quickest in the final two sectors, the Mexican crosses the line at 22.127 to go top.

Vettel consolidates fourth with a 23.119 as he is told that it is currently hard to get a tow.

Verstappen continues to complain of no rear grip in low speed corners, which is basically the first chicane.

From out of nowhere Giovinazzi posts a 22.957 to go fourth. In days gone by this was the sort of move pulled by Ferrari in order to sell a few more tickets for the remainder of the weekend.

Meanwhile, with 28:00 remaining, Mazepin is the first driver to try the softs and subsequently goes 14th with a 24.686.

However, Leclerc's time, and those of Schumacher and Alonso are deleted for exceeding track limits at Turn 11 (Parabolica).

Gasly goes second with a 22.028, the Frenchman a surprise winner here last year.

Down among the 'usual suspects' at the other end of the timesheets is Bottas, who remains 1.609s off the pace after 19 laps.

The Bulls switch to the softs and head out.

Verstappen crosses the line at 21.378, just moments after Bottas had improves to 21.451 on the mediums.

Hamilton heads out on another set of mediums. The Briton immediately going quickest in S1. Maintaining the pace in S2 he finally crosses the line at 20.926, 0.452s quicker than Verstappen, and on the mediums.

Gasly complains of a stomach ache.

With 12 minutes remaining, with an eye on the qualifying session that follows, more drivers switch to the red-banded rubber.

Hamilton believes he can "do better" in Turns 1 and 2.

The Briton subsequently impedes Ocon at Ascari, possibly a sign of things to come in qualifying. The Mercedes actually having been held up by the other Alpine.

However, Ricciardo's time is subsequently deleted.

Verstappen splits the Mercedes pair - who have yet to run the softs - with a 21.378.

And now Norris has his time deleted.

On the back straight there is a long, long line of cars, the teams clearly having learned nothing from the last couple of years here.

As the clock ticks down, the Mercedes pair haven't run the softs, neither have the Alpines and a couple of others.

Interesting that Mercedes (and Alpine) opted not to run the softs, though, based on its track record, one assumes the German team knows exactly what it is doing.