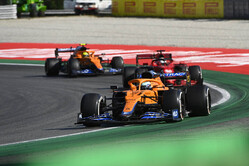 McLaren driver Daniel Ricciardo won a dramatic Italian Grand Prix ahead of his team mate Lando Norris, in a race that was characterised by a collision between title contenders Max Verstappen (Red Bull) and Lewis Hamilton (Mercedes) on lap 26, which brought out a lengthy safety car.

Both McLarens used the same P Zero Yellow medium C3 to P Zero White hard C2 strategy, stopping only once. This was the most popular strategy used during the race.

The highest-placed driver to use an alternative strategy was Mercedes driver Valtteri Bottas, who started from the back following an engine change (despite claiming pole in Friday's qualifying) and ran an opening stint on the hard tyre before switching to the faster medium at the end of the race. As the only driver in the top 10 to be running the medium tyre in the closing stages of the race, he was able to make the speed advantage count, eventually finishing third. Hamilton was on a similar strategy, prior to his retirement.

The sprint qualifying format in Italy meant that all drivers had a free choice of tyres at the race start. All the drivers chose the medium C3, apart from Mercedes, Alfa Romeo's Robert Kubica, and AlphaTauri's Pierre Gasly, who decided to start on the hard C2.

The weather was warm throughout the 53-lap Italian Grand Prix, with ambient temperatures of around 30 degrees centigrade and track temperatures in excess of 40 degrees, practically right up to the end of the race.

Mario Isola: "Both McLaren drivers used the same medium to hard strategy that was adopted by the majority of the field, but Valtteri Bottas and Mercedes also showed what was possible with the opposite strategy. The performance of the hard tyre here was underlined by the fact that Daniel Ricciardo set the fastest lap on the final lap, having managed the race perfectly since the restart. Today's warm weather certainly favoured the hard and medium compounds, which both showed minimal degradation, while at the opposite end of the spectrum, it was a bit too warm for the soft to show its speed advantage."