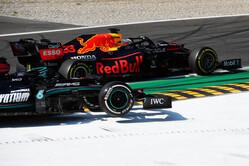 While the debate over the worth of the sprint continues, it's understandable that Toto Wolff has spoken of his doubts as to its worth.

After all, at a time many were expecting Lewis Hamilton to romp to victory, inheriting pole following a 1-2 in the Sprint, the reality is that due to a tardy start the Briton starts from fourth - behind the two McLarens - with title rival Max Verstappen on pole.

Meanwhile, the tactical engine change that the German team opted for leaves teammate Valtteri Bottas starting from the grid and therefore unable to play much of a part in today's proceedings, certainly in the early stages when Hamilton will most need him.

Indeed, looking back on yesterday's poor getaway, depending on tyre choice, Hamilton could find himself under pressure from the Ferrari and even Antonio Giovinazzi in the Alfa Romeo.

Perhaps the one thing the world champion can console himself following yesterday's Sprint, is that he didn't collect one of those awful medals - the sort of thing you hide at the back of the kitchen drawer along with that 'World's Best...' figurine.

Starting alongside Bottas at the back of the field is 2020 winner, Pierre Gasly after AlphaTauri opted to change the Frenchman's engine in the wake of his crash at the start of the Sprint.

As we know from biter experience, the opening lap here is notorious in terms of incidents, especially the first and second chicanes. Though he starts from pole, what Verstappen must do is stay out of trouble, for finishing second, third or fourth is better than a tangle with an over-enthusiastic McLaren at the start.

Make no mistake, McLaren can score a decent haul of points today, indeed a victory isn't entirely off the cards, somewhat ironic when you consider that it was here in 1988 that they narrowly missed out on a win that would have seen them victorious in every round.

Again, much will depend on tyre strategy, and the ability to stay out of trouble.

With the Weather Gods still on the naughty step following their Spa antics they are unlikely to play a part this afternoon, however, the midfield battle should be as eventful as ever.

Ferrari wants a good result on home ground, though Perez will be keen to make up for another poor qualifying performance.

While it remains to be seen what Giovinazzi can do, the Alfa driver starting 7th for the second successive weekend, it is doubtful that he will be in the mix for long, and will be overhauled by the Alpines and Aston Martins.

Long-time readers will be aware how much we love this track, having first visited in the early 70s, however the fact is that despite the incredible speeds and the challenging corners, Monza all too often produces processional races.

Unlike their 70s counterparts, when five or six cars would enter the Parabolica and exit on to the main straight in a completely different order, the aero limitations of today's cars make that impossible - hence Hamilton spending 18 laps yesterday almost glued to Lando Norris' gearbox.

Following that engine change, it was announced that Gasly took on a battery of a different spec to the original and will therefore start from the pitlane. Meanwhile, having changed Leclerc's engine for an older-spec unit, overnight have changed the unit back again.

The fastest strategy on paper is a one-stopper, starting on the mediums then going onto the softs. However, also switching from the soft or the medium to the hards can be a very good option, so all the compounds can play an important role.

The information from sprint qualifying showed how both the soft and medium are valid choices as starting tyres, and the teams will have gained vital information from their performance during the race.

A two-stopper is distinctly slower, but the best option in this case would be a soft-medium-soft strategy. The possibilities are in fact more open than usual at a sprint qualifying weekend, as nobody is locked into starting the race on the tyres with which they set their fastest times in Q2.

The pitlane opens and among the first out is Hamilton, the Briton keen to practice a start. Last out are Alonso and Russell.

"Something is coming out of the rear brakes, out of the ducts," reports Russell, "they seem to be very hot."

"Grip was very poor on that tyre," says Hamilton, "particularly on the front."

Having gone out again before taking his place in the pitlane, Gasly says: "It felt better this lap."

However, there's further drama for AlphaTauri as Tsunoda's car is pushed off the grid and into the pitlane, a nightmare scenario for the team which won here last year.

All are starting on mediums other than Hamilton, Kubica, Bottas and Gasly who are all on hards. A seemingly strange choice for the world champion. "That's a weird choice from Lewis," agrees Leclerc.

The lights go out. They're away!

Good starts for the McLaren pair and Leclerc, while Verstappen is just a little slow.

Ricciardo leads into Turn 1, while Hamilton gets ahead of Norris exiting the second part of the chicane. Around Curva Grande Giovinazzi is alongside Leclerc.

Hamilton and Verstappen go into the second chicane side-by-side and inevitably touch wheels, Hamilton going across the chicane... in the melee Giovinazzi also cuts the chicane and on rejoining the track is clouted by Sainz and spins, hitting the barrier in the process and losing his front wing.

The VSC is deployed as Giovinazzi's wing in retrieved.

"He pushed me wide," complains Hamilton.

As the VSC is withdrawn, Ricciardo leads Verstappen, Norris, Hamilton, Leclerc, Sainz, Perez, Stroll, Alonso and Ocon. Bottas is up to 15th.

Verstappen closes on Ricciardo while Hamilton harries Norris and Perez is all over Sainz.

Gasly retires, meaning that both Alphas are out.

No investigation necessary of that opening incident involving the title rivals. However, they are investigating the Sainz/Giovinazzi clash.

"It's really hard to get close," says Verstappen. He is told to wait for an opportunity.