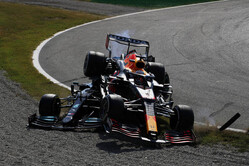 As the dust settles, and the F1 circus looks ahead to Sochi, with the stewards having had their say, the debate over who was to blame continues, with fans, drivers, former drivers and just about everyone having an opinion on who was to blame.

Meanwhile, the FIA's race director, Michael Masi has said that the "unusual" incident will be investigated by the sport's governing body.

As the pair battled for position in the first chicane, hitting the sausage kerb on the inside of the second part of the chicane, the Red Bull was lifted off the ground and subsequently landed on top of the Mercedes.

The most worrying aspect of the clash was the fact that the right-rear tyre on the Red Bull hit Hamilton's helmet, though thankfully the Halo device prevented any injury to the world champion.

Nonetheless, with images of the Briton sitting helplessly in his car as the wheel came down upon him, filling TV screens and newspaper front pages around the globe, it is not a good look for the sport.

"Incidents that are different, so it's not necessarily high G impacts or anything like that, but are unusual, we do look at," said Masi.

"Our safety department does look at them in detail, investigate and see what we can learn and what we can improve for the future," he added.

"That's how we have a whole lot of the safety features that we have today, and will continue to evolve into the future.

"We are already collecting all of the data, so we have all of the information and that will all go to our safety department together with any photographs and anything else we have along the way."

Taking to Twitter, FIA president, Jean Todt posted a picture of the Red Bull on top of the Mercedes, along with the comment: "Glad the halo was there".