"I will get my chance," says Norris 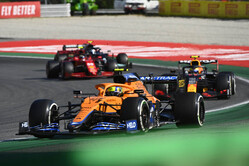 Opting not to put a famous 1-2 at risk, Lando Norris is confident that he will get his opportunity to shine.

In all the excitement it would be easy to overlook Lando Norris' strong drive at Monza. For while teammate Daniel Ricciardo took a somewhat emotional win, the Briton was always there, right behind.

Indeed, while the Australian has had a roller-coaster season, Norris has been one of the true stars, and Monza represented his fifth podium visit of the year.

Shadowing his teammate throughout, it will have been overwhelmingly tempting for the youngster to make a move and grab the limelight for himself. Instead Norris remained the perfect team player.

"I am not going to lie," he told Sky Sports, "I could have tried. I asked the team what they wanted me to do.

"I think I had the pace to at least try," he added. "I can't say if I would have got Daniel or not, but I could have tried at least. Of course, you want to go for it, but I am also here for the long term, and for our future this was the best result we could have.

“I asked the team, 'what do you want me to do - can I go for it, can I not?', he revealed. "It could have ended up like the other two ended up," he added, as clear reference to Hamilton and Verstappen. "So I'm just happy.

"As much as inside I wanted to go for it, I was just as happy to stay in second because I'm a team guy, I love the team. I love them, I've grown up with them, in a way.

"This is the best result I could hope for," he added. "I will get my chance in the future, so it's all good.

"A big thanks to everyone, all the fans and all the team," he concluded. "I am just happy. I am happy finishing second and happy for Daniel in first place."

Having lost out to Hamilton at the start, Norris was able to re-pass the world champion as he clashed with Verstappen at the second chicane.

From then until the pit stops got underway he held Hamilton at bay, briefly inheriting the lead when Ricciardo and then Verstappen pitted. He finally stopped just one lap before Hamilton and the infamous incident that followed.

"That was nice," he said of the battle with the world champion. "The longer we went I knew it he was going to have an advantage.

"He got me in the end and then with the pitstop it got me out ahead of Max and Lewis and I could have been in that crash," he added. "It could have ended up how the other two ended up.

"Four years ago I joined the team, so we've been working towards this," he continued, "we got a 1-2 finally, so a good step for us.

"I'm happy for of course Daniel getting the win and me in P2. I'm just happy for the team."

While there have been some 'freak' results of late, Norris is adamant that his team's 1-2 was not one of them and was achieved on merit.

"It's been strong all weekend. We had the pace, maybe not to overtake a Red Bull or Mercedes, but we had the pace to keep them behind.

"I think a lot of times you've seen other people win, it's because of a bit of luck here and there, but I think all weekend we've just done a very good job. We were in the right place at the right times, we've done a good job of the strategies.

"Yesterday we put ourselves in a better position and with my side getting ahead of Lewis, with Daniel getting past two cars he put himself in that position. We had a fast car and we maximised everything we had, so I don't think there was any luck with what we did this weekend.

"We bounced back well from Zandvoort, from one of our worst races of the season and we just did a perfect job this weekend. There was no luck with it, which I think makes it definitely a bit sweeter because it's just deserved."