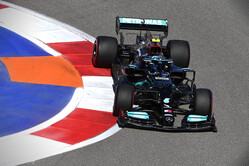 Ahead of today's opening practice session the air temperature is 18.7 degrees C, while the track temperature is 27.5 degrees. It is bright and sunny. There is 0% chance of rain.

However, having taken the weekend off in Italy, the Weather Gods appear to be out for fun again this weekend, with rain, and unseasonably cool temperatures, expected for much of the weekend, particularly tomorrow.

Back in the Alfa Romeo after missing the Dutch and Italian races is Kimi Raikkonen, having been cleared after testing positive for COVID over the Zandvoort weekend.

While Max Verstappen has a 3-place grid penalty following his encounter with Lewis Hamilton at Monza, Charles Leclerc will start from the back of the grid after taking on a new power unit that features the latest upgrade from Ferrari.

Meanwhile, there remains speculation over when - or indeed if - Hamilton and Verstappen will also bit the bullet.

The pitlane opens and among the first out are the Ferraris, followed by Ocon, Raikkonen, Mazepin and Gasly. All three compounds are in use.

Just four minutes in and all but Verstappen and Russell are on track.

A 38.601 sees Perez go top, as former teammate Ocon complains that his brake pedal is long.

Turns 2 and 18 are where the stewards are keeping an eye on track limits this weekend.

Bottas goes top with a 37.147, only to be demoted when Leclerc stops the clock at 36.708. However, the Finn is on hards whilst the Monegasque is on softs. Indeed, the Ferrari driver is the only one on the red-banded rubber.

Twelve minutes in and Verstappen finally heads out... on softs.

Verstappen complains of a power-lag, not the first time he's suffered that issue. Elsewhere, Leclerc complains of "something strange", without specifying exactly what.

Verstappen goes quickest with a 36.055 at which point the Mercedes pair switch to softs.

Gasly has his time deleted for exceeding the limits at Turn 2.

On the red-banded rubber, Bottas immediately goes 1.189s quicker than Verstappen, the Alfa-bound Finn posting a 34.427. Hamilton responds with a 34.638.

Having established their pace, the majority of the soft runners switch focus to longer runs.

The VSC is deployed while a marshal removed a piece of debris from the track.

Gasly and Alonso are the only drivers yet to try the softs, as Leclerc complains that his rears are gone.

Clearly unhappy at having lost his top spot, Verstappen bolts on a brand new set of softs. A PB in S1 is followed by a purple in S2. At the line he posts 34.654 to go third, 0.227s down on Bottas.

The Mercedes pair are back on track on hards.

As the clock ticks down all are on track bar Verstappen and Raikkonen.

The session ends... but not soon enough for Norris who has a bizarre incident as he enters the pitlane, the front of his McLaren suddenly snapping to the right after his rears lock-up, sending him into the wall.

"I just crashed," he reports, though he is able to make it back to his garage.

With torrential rain predicted for tomorrow, leading to talk that the day could be abandoned, much like the Nurburgring last year, Sunday's grid could well be decided by the timesheets at the end of FP2, which will certainly add some of that spice Ross and the boys are always talking about.