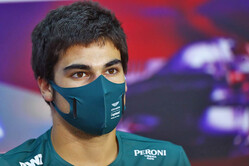 Lance: "We're ready to fight for points in Russia. It's quite a unique track: wide, fast and pretty technical - so it's about finding a groove. The Turn-Three long left-hander is a real highlight - especially at the start of the race. Sochi really tests the balance of your car, so it's important to feel comfortable straight away so you can build on that momentum throughout the weekend."

Sebastian: "Sochi is almost the opposite of Monza - plenty of corners and a constant challenge. There are some high-speed sections, and a huge main straight, but the slow, technical corners mean you need a good set-up if you're going to feel comfortable across the weekend. We'll be looking to maximise every lap on track and then fight for points on Sunday."

The tyres used in the Russian Grand Prix will be Pirelli's three softest compounds; the C3, C4 and C5. This selection was last used at the Styrian Grand Prix earlier this year.

There were a total of just 28 overtakes at Sochi in 2020. In the previous three races, 58% of overtakes have used DRS, with the main straight from Turn 18 to Turn Two providing the best overtaking opportunity. The second most popular overtaking spot is along the second DRS zone going into Turn 13. Drivers often have a good chance to make up positions on lap one and on Safety Car restarts.

First lap incidents at Sochi are very likely. There have been first-lap Safety Cars in four out of the last five races here. More than 70% of that Safety-Car action has occurred in the opening five laps, suggesting that drivers tend to quickly settle into a rhythm around here. Since its introduction in 2015, the Virtual Safety Car has been deployed just three times."