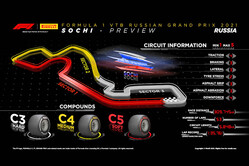 For the first time since Austria, the three softest compounds in the range have been nominated for this weekend's Russian Grand Prix: C3 as the P Zero White hard, C4 as the P Zero Yellow medium, and C5 as the P Zero Red soft. This is the same nomination that was made in Russia last season, when the event was held at a similar time of year.

Sochi is a low severity track and the track surface has been steadily maturing since the asphalt was originally laid nearly a decade ago. As a result, the softest rubber in the P Zero range is the perfect choice for the Russian track.

The weather should be quite mild at this time of year, so helping to reduce thermal degradation, although this aspect is more related to the track's layout and roughness.

The corners located around Sochi's Olympic Park are generally slow to medium speed, with a number of 90-degree turns. In general, the circuit is all about traction and braking, so it's rear-limited. The most demanding corner (and the only front-limited corner) is Turn 3: a multi-apex left-hander that is similar in some ways to Istanbul's famous Turn 8 in Turkey, which is next grand prix on the calendar.

Teams tend to run medium to low downforce, on account of Sochi's quite long straights, which places the emphasis on mechanical grip from the tyres.

The track is not used a lot during the season, so it's often particularly ‘green' and slippery towards the start of the weekend. This can sometimes cause the tyres to slide rather than grip, especially during Friday's free practice sessions but, as was the case last year, graining usually reduces a lot between free practice and the race due to track evolution.

Russia has traditionally been a one-stop race, and this was mostly the case last year as well. The top two finishers used a medium to hard strategy, but there was plenty of variation further down the order with some drivers starting on the soft, and three competitors using all three compounds in a two-stopper as well.

Mario Isola: "We've seen in the past that there's been quite a lot of different strategic thinking, with all three compounds on the grid at the start of the race and varying tactics during the grand prix. Last year, the soft C5 performed better than expected and graining levels were reduced over all compounds between free practice and the race, due to high track evolution.

"In the past, some drivers have even tried a very early switch to the hardest compound and attempted to run all the way to the end, but last year this wasn't quite possible as these days the asphalt has matured and is not as smooth as it was in the past. With the extra rubber on track from the very full schedule of support races this time, track evolution and grip should be further enhanced."