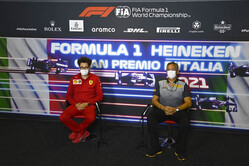 Q: Let's start with some Monza memories please. Just tell us, what does Monza mean to you? And also, tell us about your earliest memories of this race track?
Mattia Binoto: What does it mean? Certainly a lot. It's the home grand prix, the Italian Grand Prix, it's the circuit where power, speed, is the most important. So as well as I would say, as a past engine engineer, it certainly has been very important. So, certainly here, you know that you can feel the passion of the tifosi. It's a circuit where for Ferrari doing well is almost as important as the rest of the championship. But yes, I think it's great to be here in Monza. It's great to be here with fans in the grandstands. It's important for us having the tifosi supporting us. That's something which is key. So, it's really something important and great. On the memories, many. My very first time working for Ferrari was here at Monza, 1997. And since then certainly a lot of emotions. Good times. Good victories. I remember the one - maybe I'm wrong on the date - should be 2003, I think coming from Hungary with Michael. Difficult race, championship somehow compromised so very important to have a good race here in Monza, and Monza did a fantastic entire weekend, winning ahead of Montoya, and that really was the change on the championship, since then, and finally he won the championship. And then I cannot forget, no doubt as well, 2019, Charles winning here in Monza. It's not far behind. Fantastic race, defending the position and then the podium with all the fans and the tifosi there celebrating him, was something really, really special. I will never forget it.

Q: Mario, please?
Mario Isola: My memories are from, I would say '85-'86. I was one of the tifosi, as Mattia said, because living 30 minutes from here it was quite easy with my small motorbike to come to the circuit, as most of the tifosi that are coming here, I was enjoying Formula 1 but also other races. And then the first time for me in Pirelli team kit was in 2001 with the GT Championship. The FIA GT Championship, and obviously since 2011 with Formula 1, so plenty of memories, nice memories and it's like being at home, basically.

Q: Mattia, Charles said yesterday that this is likely to be a difficult weekend for Ferrari. How's progress so far?
MB: I think on paper it's a difficult weekend for us. We know that we we don't seal the gap on power performance and somehow with the long straights you've got in Monza, that's a clear disadvantage. I think if we look at FP1 so far, we are in the midfield. No surprises from that. Obviously we will see this afternoon in quali. The car has balance, no big issues with the set-up but certainly we do not feel we can challenge for the first rows but, as I said, that was not a surprise, somehow expected. It will be an interesting weekend with the sprint qualifying race format, having already the quali in the afternoon, so this morning very little time for the drivers to adapt to the low downforce package. We have braking, high speed braking and I'm pretty curious. Pretty curious to see the quali. The drivers drove a lot this morning, a lot of laps, all of them, because without doubt confidence will be the most important for the afternoon.

Q: On the subject of confidence, I wanted to ask you about Carlos' problems last weekend in Zandvoort. He seemed pretty perplexed after the race. Do you understand what the issues were now?
MB: Yes, certainly after the race he was perplexed, as you said, because he was not as fast as he was expecting, and not as close as usual to Charles. We made all the analysis on the car in terms of set-up, internal functionality. We found something on the car which was not performing 100 per cent, without going into all the details. I think that we reported that back to Carlos, happy with the explanations. Is he more comfortable now, attacking Monza, and that's what's the most important for us.

Q: There's a lot going on elsewhere in the paddock. We've had a lot of driver announcements this week. There's only one seat left for 2022 now, over at Alfa Romeo. You supply the team with power units. How much of a say do you get into who takes that drive?
MB: Not really much. I think that's really a choice of the team. The team are really independent on the choice of their driver, which is important for us as well. It's clear as well that Antonio for us, he's our reserve driver, he's an Italian driver, he's part of the Ferrari family, he's a Ferrari driver, so for us it will be great to have him still driving next year. We believe that he is a good driver and somehow he deserves to have a seat next year but, as I said, we cannot influence the team decision. As power unit supplier, obviously I think we are always evaluating the collaboration, the partnership with team, and obviously the driver choice is part of the evaluation.

Q: Can we throw it forward to next year. Tell us about the 2022 car. How far advanced are you?
MB: 2022 is progressing. It's progressing and now is the time you are normally freezing the chassis geometries and the entire concept of the car, suspension layouts, cooling layouts, so let's say that the concept is certainly a lot advanced and while the concept is frozen, the chassis is already in production. It's time to continue working on the body shape, on the aerodynamics, bodywork, wings etcetera, and no doubt we are working a lot as well on the power unit. The power unit next year will be brand new in terms of, let me say, concept and design. So, for us, it will be important for us to make the most important step we can, knowing that, as I said before, we've still got a gap in terms of performance on the power unit. So, the objective is really to try to catch that disadvantage, to close it. That's why I think, on the engine, we are working very hard and that key moment where you need to find still performance but to start fully homologating the reliability of the product for the next season.

Q: Mario, while we're talking 2022, how's progress with next year's tyres?
MI: We finalised the development of the tyres and after Budapest we made an analysis on the result. We are quite happy with the next product, feedback from drivers was positive and now we have the last test for Wet and Intermediate in Magny-Cours next Wednesday and Thursday. And then, let's see what happens with the new cars because, as you know, we develop the 2022 tyres with the mule cars that the teams supplied for testing. We are expecting higher loads with the new cars, so obviously this has an impact on the tyres. Nothing major. I mean, it's a normal evolution that is coming from the teams. And now we are preparing the post-season test in Abu Dhabi where all the teams have the opportunity to test the final version of the product for next year and get important information and this is where we are at the moment.

Q: You're testing next week with Alpine at Magny-Cours. Why Magny-Cours?
MI: Because there are not many circuits where we can run a wet test in a consistent conditions. Magny-Cours is equipped with some tanks - they don't have sprinklers but they can wet the circuit quite well. You need a circuit that is flat in order to keep consistency in the level of water. In the past we did a test in Abu Dhabi, for example, during the night. Obviously Magny-Cours is closer, compared to Abu Dhabi, and it's a way also to test the tyre on a different circuit, compared to Paul Ricard - that is our reference circuit for wet-weather testing.

Q: Can we throw it back to Zandvoort now? Incredible race track, the drivers loved it, did the tyres behave as you expected through the banked corners there?
MI: Yeah, and thanks to the simulation that we got from the teams we had the possibility to evaluate the additional load and stress that is due to the banking and select the right compounds. And also, give them proscriptions for the tyres in Zandvoort. Looking at the tyres after the race, they were performing as expected. All the three compounds were suitable for the race, they were working quite well, teams had the option to choose different strategies and that is the final target for us. So, quite happy with the choice, and also the behaviour of the tyres during the race. That was very new for us. We had basically no information on the track roughness. That is also important for us to know in advance.

Q: (Luke Smith - Autosport) Question for Mattia. Mattia, you've spoken about Mick Schumacher's progression through his rookie season, earlier this year. There does appear to be a bit of a situation brewing at Haas between Mick and his team-mate Nikita Mazepin. I just wanted to know what sort of knowledge do you have of it? Are you keeping an eye on the situation there, and how it might impact Mick's development?
MB: What you're mentioning is something that certainly the Haas team principal is managing. As Ferrari, we are not entering into those details and even not too aware. We are more focussed on Mick, in terms of progression. We said that this season for him was important to not have too much pressure, but to make sure he was continuously improving in terms of experience and driving. I think Mick is doing very well, it is a first season, certainly there are things that can be addressed or improved but as a first season, I think he's doing a proper job. Happy to see the progress. Now I think next year will as well be important for him. A second year. I think by then we will expect a step in terms of speed and, let me say, consistency but so far, happy. And, as I said, whatever is happening within the Haas team, that's not really our affair.