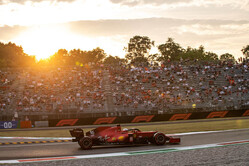 For Scuderia Ferrari, the first chapter of the Italian Grand Prix weekend ended with a result that pretty much matched expectations, on a track that, on paper, is not best suited to the characteristics of the SF21. The unusually late afternoon qualifying session at Monza to set the grid for tomorrow's Sprint Qualifying saw both drivers get into the top ten. Carlos Sainz was seventh in Q3 with a time of 1'20"462, just ahead of Charles Leclerc, eighth in 1'20"510.

At 16.30 CET, the two SF21s will therefore line up alongside one another on the fourth row of the grid for the 18 lap race. The finishing order will then define the grid for the start of the 72nd Italian Grand Prix that gets underway at 15 on Sunday.

Carlos Sainz: I think today we showed we have made good progress since last year and we did a good job with both cars in Q3. We obviously want to be further up the order and even more so in front of the tifosi, but I think today we extracted the maximum out of the car.

Q1 was quite tricky because of traffic and unfortunately we quickly understood we were a bit too far away from the top 5. Despite that, we kept improving throughout the session and managed to put together a good lap in the end for P7. Overall it was a solid session. It's a decent starting position for tomorrow and we will fight to gain positions in the Sprint Quali and on Sunday.

Charles Leclerc: Qualifying was really tough for me today. We had an issue throughout the sessions with the electronic management of the engine braking. The situation was especially tricky in Q1, but for Q3 it had slightly improved and it should be fine for tomorrow.

All things considered, eighth is a good result. We will try to gain some positions in Sprint Qualifying to secure a good starting position for Sunday's race.

Laurent Mekies: That was a very busy qualifying session, as is usually the case at Monza. It was made even more intense for us because of a problem with the electronic management of the engine braking on Charles's car right from his very first run in Q1. We tried to find the cause and gradually the situation improved, but Charles definitely didn't have an easy time of managing the afternoon!

Having said that, this result, with both drivers on the fourth row of the grid for the Sprint Qualifying tomorrow afternoon, is in line with what we expected going into this weekend. We should not forget where we were in terms of outright performance at this track last year and, even with the limited opportunities for development this season, we have seen signs of progress. It's still not enough for a team like ours, but here too we have been able to verify that we are working in the right direction. The weekend format doubles the opportunities for getting a good starting position for the race and that's what we will try and do tomorrow afternoon.