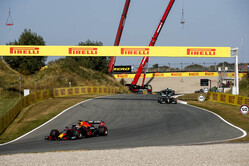 Mercedes driver Lewis Hamilton, who finished second, opted for a different strategy: starting on the soft and then running two stints on the medium. He added an unscheduled third stop right at the end of the race for softs, to claim the fastest lap championship point.

The top five finished in the order in which they started on the grid. However, there were five different strategies in the top six, demonstrating the different tactical approaches that many teams took to the race.

Red Bull driver Sergio Perez was the only driver to start on the hard compound, from the pit lane. He went from hard to medium to soft, finishing eighth and being voted as driver of the day.

There was a mixture of one and two-stoppers during the race, with seven drivers stopping twice and the rest stopping once. Hamilton was the only driver to stop three times.

Today was a bit warmer than previous days, with track temperatures that peaked at 32 degrees.

Mario Isola: "All three compounds that we nominated for the race played a prominent role, underlining how there was a big variety of successful strategies today on this brand new and very exciting circuit, with the drivers pushing to the maximum all the way to the end. Along with the warmer weather today compared to previous days, this meant that there were plenty of demands placed on the tyres - so it was the right decision to come here with the three hardest tyres in the range. Wear was higher than predicted due to a lack of long runs before the race, while degradation was in line with expectations. Prior to the final stops for the soft from Mercedes at the end of the race, a used medium tyre showed its capability to set the fastest lap. Congratulations to Max Verstappen and Red Bull for an extremely popular home victory."