"He doesn't know me!" insists Verstappen 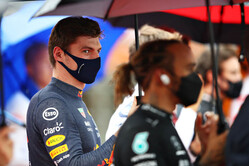 Max Verstappen reacts to title rival Lewis Hamilton's claim that the pressure of battling for the title is getting to him.

If - as one suspects - Lewis Hamilton was seeking to get into Max Verstappen's head with his 'lack of title battle experience' comment, it would appear to be 1-0 to the Mercedes driver heading into the Russian Grand Prix weekend.

Speaking earlier, Hamilton had suggested that the pressure of battling for his first title was getting to his rival.

"I know what it's like having the fight for your first championship and your eagerness and you go through lots of different experiences and emotions during that time," said the Briton.

"Obviously he won't admit to it and I'm not going to make an assumption," he continued, "but I'm just saying I remember what it was like when I had my first one and it definitely mounted up. It was difficult, it was intense, I was going through a lot of different emotions, I didn't always handle it the best and that's to be expected.

"There's a lot of pressure," he added, "you're working in a big team, there's a lot of self-expectation and pressure because the desire to win is huge. So I empathize and I understand that, but I know that we will continue to grow from this."

"I'm so nervous I can hardly sleep," snapped Verstappen when told of Hamilton's comment. "It's so horrible to fight for a title. I really hate it.

"If someone knows me, I think I'm very relaxed about all those things and I really can't be bothered, I'm very chilled," he added. "It's the best feeling ever to have a great car where you can go into every weekend and you can fight for the win. It doesn't matter if you're just leading a championship or not.

"Those comments just show that he really doesn't know me. Which is fine, I also don't need to know him, how he is fully. I just focus on myself, I really enjoy it out there at the front and hopefully we can do that for a really long time."

Like his title rival, Verstappen - who already faces a three-place grid penalty this weekend following the events at Monza - will almost certainly need to take on a fourth engine at some point. Asked when that might be, he replied: "To be honest there's a lot of question marks...

"We will have to wait and see a little bit throughout the weekend what's happening and how competitive we are as well. Nothing has been fully decided yet."