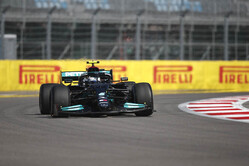 Valtteri Bottas led a Mercedes one-two in both free practice sessions today, using the P Zero Red soft C5 tyre on each occasion. The Finn, who also topped both Friday sessions last year in Sochi, went faster than he did last year in FP1, but couldn't quite match his 2020 benchmark in FP2.

However, it was a slightly different pair of practice sessions compared to normal. With persistent rain expected tomorrow, the drivers concentrated on collecting data across all three compounds for Sunday, when weather conditions are expected to be still variable.

Ferrari driver Charles Leclerc and Red Bull's Max Verstappen will be starting at the back of the grid due to engine changes - which meant that qualifying simulation was not a priority for them in free practice.

Conditions were reasonably cool today, with ambient temperatures around 22 degrees centigrade and track temperatures up to 32 degrees during FP2.

A red flag interrupted the FP2 session with 20 minutes to go, disrupting some of the long runs. This made it harder to assess the performance gaps between the compounds, but so far there is around 0.8 seconds between P Zero Red soft and P Zero Yellow medium, and an estimated 0.5 seconds between medium and P Zero White hard.

Mario Isola: "Tomorrow's expected weather influenced free practice today, with the drivers concentrating more on collecting plenty of data over all three compounds as well as setting a lap time just in case FP2 has an influence on the grid positions for the race, with a strong chance that tomorrow will see wet conditions all day. The circuit actually offered quite good grip and, as expected, plenty of track evolution, although the rain tomorrow is likely to reset the asphalt, which adds to the question marks. Under these circumstances, the red flag in FP2 was unfortunate, with the teams likely to head into Sunday's race with a distinct lack of dry running."