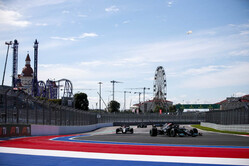 Other than Lando Norris clouting the pit entrance wall at the very end, it was a pretty uneventful session.

However, with talk of tomorrow's running possibly being abandoned due to an anticipated deluge, it could be that the order at the end of this session decides the grid... consequently there's a lot to play for.

To add a little extra spice, let's not forget that Verstappen has a three-place grid penalty and Leclerc is starting from the back of the grid. There is also the little matter of when the Dutchman and title rival Hamilton will take on another engine.

Ahead of the session, Michael Masi assures Red Bull that currently the intention is to hold qualifying as scheduled on Saturday. However, he advises the Austrian team to carry out its race simulations in this session.

As the lights go green, Vettel heads the queue at the end of the pitlane. He is followed out by Raikkonen, Ocon, Leclerc, Sainz and Gasly on a mixture of all three compounds.

As Russell and Latifi head out, Ricciardo remains the only no-show, McLaren having opted to change his engine over the break.

"The team found an issue on his power unit, which can be fixed outside of the car this evening," says the Woking outfit. "In the meantime, we have changed his PU to one from the existing pool to run in FP2."

Hamilton is currently third (35.662), ahead of Perez, Alonso and Verstappen.

However, all of the above are on mediums bar Leclerc who is on softs.

Hamilton is travelling very, very slowly around the track.

Meanwhile, Red Bull reveals that Verstappen will start the race from the back of the grid after taking on a new engine.

Meanwhile, replay shows Hamilton overshooting his pit marker causing his front jack man to fall. Enquiring if he is okay, the world champion is given the thumbs up.

Bottas improves to 33.593 on the softs and Verstappen 34.621. They are separated by just over a second, but with an eye on the fact that he will start from the back on Sunday the Dutchman is clearly running an entirely different programme. Indeed, not needing to save his softs for qualifying he is making full use of them today.

With an eye on Sunday, Red Bull really needs Perez to qualify as near the front as possible in a bid to cause problems for the Mercedes pair. He is currently 10th, 1.3s off the pace.

Ricciardo heads out twenty-five minutes into the session, his McLaren sporting the hard tyre.

"I'm not improving," says Ricciardo, "do you want me to box?" He is currently 3.439s off the pace after 6 laps. "I'm still struggling with the same thing as FP1," he adds, without revealing precisely what that "thing" is.

Oh dear, Giovinazzi has gone off and hit the barriers.

The session is red-flagged as the Alfa grinds to a halt.

Replay shows him losing the rear after running slightly wide and on to the Astroturf at the exit to Turn 8, much like Leclerc earlier only the Ferrari driver got away with it.

His rear wing askew, it is unclear what other damage he has incurred.

The session resumes with 16 minutes remaining, Verstappen heading the queue at the end of the pitlane.

Meanwhile, Christian Horner has admitted that it is tomorrow's anticipated wash-out that led to the engine change decision.

All three compounds are still in use, though the majority appear to be on mediums.

A moment for Norris in Turn 7 shortly after allowing Perez through, sees the McLaren driver straddling the sausage kerb. Shortly after, Hamilton mirrors his countryman's error.

Stuck behind a Williams, Verstappen complains that it is "impossible to pass".

The high fuel runs continue, Bottas setting the pace, ahead of Verstappen and Hamilton.

Out come the yellows after Gasly loses his front wing after running over - or rather into - the sausage kerb.

Remember, if those pesky Weather Gods decide to have some fun tomorrow, that could form the grid... with the exception of Verstappen and Leclerc, who go to the back of the grid... without passing go and collecting their £200!