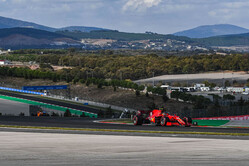 Scuderia Ferrari produced a solid performance this Friday of the Turkish Grand Prix. During the 120 minutes of free practice at Istanbul Park, both drivers got through their planned programmes without experiencing any problems. As was the case a fortnight ago in Russia, Charles and Carlos each had very different job sheets. In a reversal of the Russian weekend, it was Leclerc who worked in both qualifying and race trim, while Sainz focussed almost entirely on the Grand Prix, given that he starts from the back of the grid, after his car was fitted with a fourth power unit, featuring the new hybrid system first seen on his team-mate's car in Sochi.

Carlos thus got to grips with the new hybrid system, completing 59 laps. In the morning session, he only ran the Soft tyres, setting a best time of 1'24"860. In the afternoon, he also ran the Medium compound, before setting his fastest time on the softest tyres in 1'24"903.

Charles also only used the Softs in the morning, posting a time of 1'24"654, completing a total of 27 laps. In the afternoon, he started off with the Medium tyres, doing a 1'24"102, before setting the second fastest time overall, a 1'23"970 on used Softs. In the second part of the session, the Monegasque concentrated on running in race trim, lapping at a constant pace. He did a total of 56 laps.

Charles Leclerc: Compared to last year, the track has more grip. The car felt really good today, and I really enjoyed driving as I could play with the rear of the car and rotate it like that. This seems to have worked out well for now, as we were quite competitive.

Although things are looking positive so far, it's only Friday. We need to keep our heads down and work on fine tuning the car to have a good qualifying.

Carlos Sainz: A bit of a different Friday for us obviously, knowing we will start from the back of the grid due to the penalty for changing the PU. We checked everything was running smoothly, tried different set ups and worked with the Soft and Medium tyres, focusing on the long runs. It felt quite strange to go into a Friday without attempting to go fast in the short runs, but our target this weekend is to make up places on Sunday.

The car looks competitive and the track has changed a lot since last year. There's a lot of grip, probably one of the highest of the season so far and it's important to understand how it affects the tyres and the car performance.