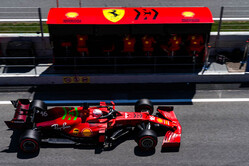 Mattia Binotto has revealed that Ferrari's 2022 contender is already under construction.

Due to the significant rules overhaul, one of the biggest in living memory, most teams have already switched focus to their 2022 contender, however Ferrari is seemingly already well underway with the construction of the tub.

"Now is the time you are normally freezing the chassis geometries and the entire concept of the car, suspension layouts, cooling layouts, so let's say that the concept is certainly a lot advanced," said the Italian, "and while the concept is frozen, the chassis is already in production.

"It's time to continue working on the body shape, on the aerodynamics, bodywork, wings etcetera," he added.

While the engine rules are frozen until the introduction of the new regulations in 2026, the Maranello outfit is introducing a new power next season, following on from upgrades to be introduced in the latter stages of this year - upgrades which could see the unit develop an extra 15 bhp courtesy of changes to its hybrid elements.

Though the Italian team has taken a significant step forward this year, last year's issues were mainly down to the power unit as the manufacturer sought to recover from the fuel flog saga of late 2019 that resulted in numerous technical directives and a subsequent dramatic drop off in form.

"We are working a lot as well on the power unit,” said Binotto.

"The power unit next year will be brand new in terms of, let me say, concept and design," he continued. "So, for us, it will be important for us to make the most important step we can, knowing that we've still got a gap in terms of performance on the power unit.

"So, the objective is really to try to catch that disadvantage, to close it. That's why I think, on the engine, we are working very hard and that key moment where you need to find still performance but to start fully homologating the reliability of the product for the next season."

Asked for insight into the upgrade expected later this season, he said: "We are working very hard to have them ready as soon as possible.

"It's a change in technology on the hybrid side," he continued. "In order to introduce them, we need first to transport the materials, and being dangerous materials, you need formal homologations and certifications for it. So it's not only a matter of developing the hybrid system on the dynos and to somehow prove their reliability, but there is a lot of aspects that need to be addressed before to have them available on track.

"At the moment, there is not a race that is decided. It will be as soon as possible because we believe running it as much as we can this season will be of interest for next season. So, hopefully it will be in the next races and very soon."