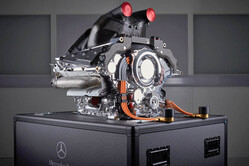 The MGU-H is to be dropped as F1 looks set to delay the introduction of the new generation of power unit until 2026.

Ahead of Sunday's Grand Prix, F1 and the FIA issued a brief statement following a meeting with the existing - and potential - power unit manufacturers.

"The discussion was positive and progress was made - some details remain to be addressed, however we expect these to be resolved in the coming weeks."

As ever, short, sweet and giving away very little.

The "potential supplier" that attended was the Volkswagen Group, whose brands include Audi and Porsche.

Up for discussion was the next generation of power unit, which has now been delayed until 2026.

Keen to reduce costs - and improve reliability - the costly MGU-H is to be dropped, which should hopefully see the cost of the power units reduced from $2m to around $1m

Other than cost, another item on the agenda was sustainability, and to that end the sport is looking at a more simplified design, the use of biofuels and increased electrification, indeed there is talk of increasing the electrical power from 120 to 350 with kilowatts, with recovery possibly set to use the front axle.

Interestingly, it is understood that the sport, while looking to encourage new manufacturers, is considering an 'entry fee' while also calling for a guarantee of commitment for up to ten years.

Considering what was to happen later that afternoon, it is interesting that once again Mercedes and Red Bull were involved in a minor war of words, as the sport considers whether to categorise the Austrian manufacturer as a new entity or not.

While few were giving much away, Toto Wolff revealed that despite initial reluctance, Mercedes has capitulated and will allow the MGU-H to br dropped in the hope that it will bring the Volkswagen Group on board.

"The MGU-H is going to be dropped if we can find alignment of many other points," said the Austrian, according to Reuters. "I think it's a compromise. I cannot speak for anybody else but at Mercedes we are prepared to... in order to facilitate the entry of the Volkswagen Group.

"But there are several other topics where compromise needs to be found," he admitted. "If compromise cannot be found then we will probably revert to the governance and have 2026 regulations that the FIA and FOM are going to come up with."