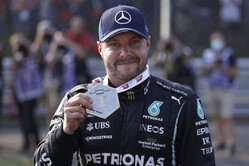 Valtteri won Saturday's F1 Sprint after a strong performance from P1 in the 18-lap, 100km Sprint. Lewis suffered wheel spin off the line, lost three positions and finished P5; he will start the Italian Grand Prix in P4.

The Finn will start tomorrow's race from the back of the grid following a Power Unit change for a 4th unit. Valtteri adds three points to his Drivers' Championship tally and the Team's Constructors' Championship total.

Valtteri Bottas: A good day in the office for me personally, it was a clean race and I had the pace. Feels like it has been a while since I've finished first in a race, so I am very happy. I had a good start and a clean restart as well, so those things were key for me. The car felt good throughout, and it was great to finish P1 today and get some points as well. Unfortunately, I'm starting from the back tomorrow, but the speed is there, so I'll be fighting. There are overtaking opportunities here so I hope I can make my way up the grid and have a good race for the Team. It won't be easy, but we have the pace and with the right strategy we can make something happen. I'll give it everything, I can promise you that.

Lewis Hamilton: Well done to Valtteri on a great drive. It was a frustrating day for me, with a bad start due to too much wheel spin and then not being able to recover from there. During the race, it was difficult to get close enough to overtake the McLarens so we'll be looking into that as well. We lost valuable points today and we'll need to work hard to take maximum points tomorrow. It's not the outcome we wanted for today and we can't afford days like these, especially when it is this close in the Championships. We have work to do to analyse today's race and prepare for tomorrow. I hope we will be able to limit the damage, and I know Valtteri and I will come out fighting.

Toto Wolff: That was a mixed afternoon for us. Valtteri didn't put a foot wrong and put in a really strong performance to finish first on the road. Of course, he won't convert it into pole position because of the engine penalties, and it will be a tough race tomorrow to make his way back through the field because overtaking here is not easy, as we saw today. For Lewis, the outcome was decided by the start; there was too much wheel spin off the line, he lost positions and then in such a short race distance, there wasn't enough of a performance delta to make back any positions to the cars in front. It's not the outcome we wanted but there is still plenty to play for tomorrow in the race. We will spend the evening looking at our options on strategy with both cars, to make sure we take every opportunity to maximise our points score.

Andrew Shovlin: Well done to Valtteri for the win today; he kept it under control from start to finish. Unfortunately, he's facing a rather different race tomorrow from the back but he's got good pace so hopefully he can recover well. Lewis on the other hand had a tough afternoon. The start wasn't great, we'll look into what went wrong before tomorrow but despite being much quicker than the McLarens, he just couldn't get close enough to pass. We'll have a look at strategic options for Lewis tomorrow but the reality is that if we struggled to overtake the McLarens today we'll face the same situation tomorrow and that's going to hand Max a very easy win. We need to look at every possible opportunity as it's our job to make sure that doesn't happen, and it can often be an eventful race here, but we can't afford to drop back in the first stint at the rate we did today.